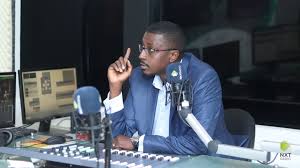 Kwikiriza who has vast experience in radio programming and radio hosting will take over from Robert Kabushenga who recently announced that he will take an early retirement from the government owned publishing house.

“This is to let you know that I have asked the board for an early retirement and this has been accepted. However, the board has asked me to manage the transition for the next 90 days which I have accepted,” Kabushenga announced in an email to Vision Group staff members on Friday January 29th.

Kabushenga, prior to his announcement had been at the helm of Vision Group for close 14 years since his appointment in October 2006.

A source close to Kwiriza revealed to this website that the tall dark skinned radio personality will be leaving the Naguru based Nxt Media in a week’s time to prepare for his new role at Vision Group.

As Vision Group CEO, Kwikiriza will be responsible for the daily running of New Vision, Bukedde local News Paper and a host of other publications under the group.

He will also oversee Urban Television, Bukedde TV, TV West alongside all the radio stations under Vision Group.

Kwikiriza brings a lot of experience to Vision group having worked as a radio presenter at Sanyu FM (Friday night and Saturday night show) and then Radio One (Mid-morning show) and Capital FM (Drive Show).

He crossed Ugandan borders to work at Radio 10 and Flash FM (Programme director) in Rwanda.

He would later move to Kenya where he worked at Radio Classic FM (Drive show) and Nation FM/Easy FM (Breakfast show).

Also along his career, he did a basketball show on Zuku TV, hosted the Stanbic Schools Championship on NTV and has been a co-host of NBS’s weekly lifestyle show Another Round which he hosts with Gaetano.

Kwikiriza’s reputable career path put him in the good books of President Museveni and the National Resistance Movement which saw him lead the Public Relations team of the Anti-Corruption Court.

Until today, Kwikiriza has been responsible for running all PR and media related matters in the Edith Nakalema led committee.

While his appointment hasn’t been announced, The Tower Post has learnt that he will be joining Vision Group to get acquainted with the daily running of the institution as Kabushenga prepares to vacate the seat.

The Tower Post’s efforts to reach Kwikiriza for a comment were futile as he couldn’t pick calls from all his known numbers.

A funny video of a Slay Queen has surfaced on social media and it is being shared crazily by a number of people who find it hilarious. The well-dressed and pretty lady was banging the married man in the absence of his wife when she suddenly came home.

To avoid the shame that comes with being caught with a married man on his matrimonial bed, the young lady who is in her 20s fled through the window.

Irrespective of the fact that the window was a small size, the young lady was able to squeeze through and landed outside like the “Terminator”. Unlucky for her, nosy neighbors were there and they captured everything on camera.