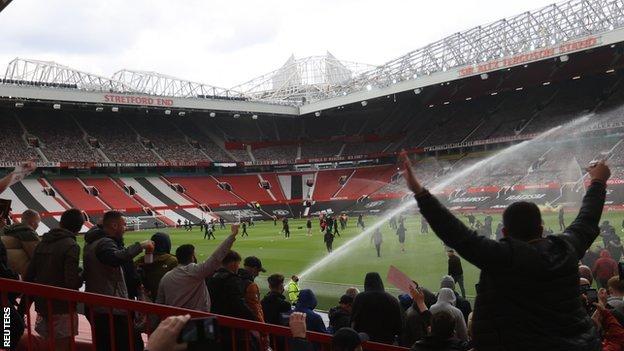 Police forced to disperse crowds, who threw bottles and flares

Man Utd team remain in the Lowry Hotel, where they had gathered to travel to the stadium

Manchester United’s match against Liverpool has been postponed after supporters protesting the ownership of the Glazer family broke into the ground and forced their way onto the pitch.

The kick-off, originally scheduled for 4.30pm, was delayed but an announcement by the club at 5.35pm confirmed that it had been called off after discussions with the police ‘due to safety and security considerations around the protest’.

Neither team made it to the ground. Manchester United players, due to leave the Lowry, were still there at 5.45 pm while Liverpool were also being held back on security grounds.

A decision on when the match will now take place will be taken by the Premier League and the two clubs.

The Glazer family tried to implement something that would’ve damaged every single community in this country that has football at the heart of it and that is why they are dangerous. Perez is dangerous, Laporta, Agnelli, they are dangerous to the concept of equal opportunity and fair play in European football.

“We understand and respect the strength of feeling but condemn all acts of violence, criminal damage and trespass, especially given the associated COVID-19 breaches.

Fans have many channels by which to make their views known.” Statement from old Trafford officials.

“I have sympathy with the fans, 100 percent. It’s a tipping point for them. It was peaceful. One or two bottles were thrown and a couple of flares – I think that was towards Jamie to be fair – but they’ve had enough.Enough’s enough. United has some of the best fans in the world and we’ve seen today that they’ve come to the end with the ownership.”  Roy Keane, former United captain.

“I never thought the Glazers were brilliant owners, but I’ve always thought in football there were worse owners. However, I think all football fans should today unite behind what Manchester United fans have done because what the Glazers did two weeks ago was really dangerous for English football. We must not forget that” Gary Neville noted.

The rearrangement of the fixture will be communicated in due course.