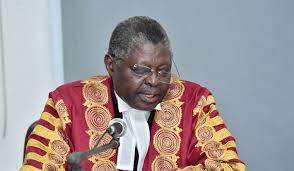 Lango sub-region has received with shock the news of the demise of Supreme Court Justice, Ruby Opio Aweri. He passed on Wednesday morning from Mulago National Referral Hospital where he was admitted two weeks ago.

His death shocked the entire sub-region where people described him as a jolly, down-to-earth, hardworking, humble, and selfless servant. Levi Okodi, an elder brother to the late justice says the family is grieved and saddened by the death.

Okodi describes his brother as a “useful” person whose death has robbed both the family and Uganda as a whole.

Daniel Omara Atubo, the former Lands Minister and an advocate of the high court describes Opio Aweri as a man who had grown in professionalism which should be emulated.

“He leaves behind this important legacy that if we want the judiciary to do its work and people to be proud of the judiciary, let those who join the judiciary grow through the ranks and those who are appointed should be independent and professional as it was exhibited by Justice Ruby Opio Aweri,” said Atubo.

Adding that; “The public view at the moment is that the judiciary is compromised, weakened and full of carder judicial officers. This is not good for our judiciary so the death of Ruby Opio leaves a lot of questions to be answered about our judiciary.”

Retired Colonel Tony Otoa, former Prime Minister Lango Cultural Foundation described the justice as a principled, honest, and dedicated public servant whose death has shocked the entire nation. Otoa is disappointed that the justice died at a time when the cultural institution needed him the most.

He tasked the young generation, especially those practicing law to emulate the late Justice Opio Aweri, saying his legacy must be carried forward.

Counsel Daniel Odongo, from Okwii and Company Advocates, says the late justice inspired him and many other students to pursue a career in law.

“I first met Hon. Justice Aweri in the year 2000 at the High Court Criminal Session in Lira where he was assigned to work and he freely interacted with us, guided and gave some of us assignments. I and other students like Hon. Denis Hamson Obua, Maj. (RT) Sam Ogwal, and others were in for our clerkship for Diploma in Law,” he said.

Adding that; “Since then, he remained to inspire me and several others to join the law fraternity. Hon. Justice Aweri hilariously served his country with humility, a clean record of service, and honesty for which we shall forever miss.”

Emily Akullo Omacara, a member of Lango Tourism Forum described the late Justice Opio Aweri as a committed member of the tourism forum. “He was our very committed member and commented on many things that defeated the forum because he knew a lot. He also supported the cause very much and we will really miss him,” she said.