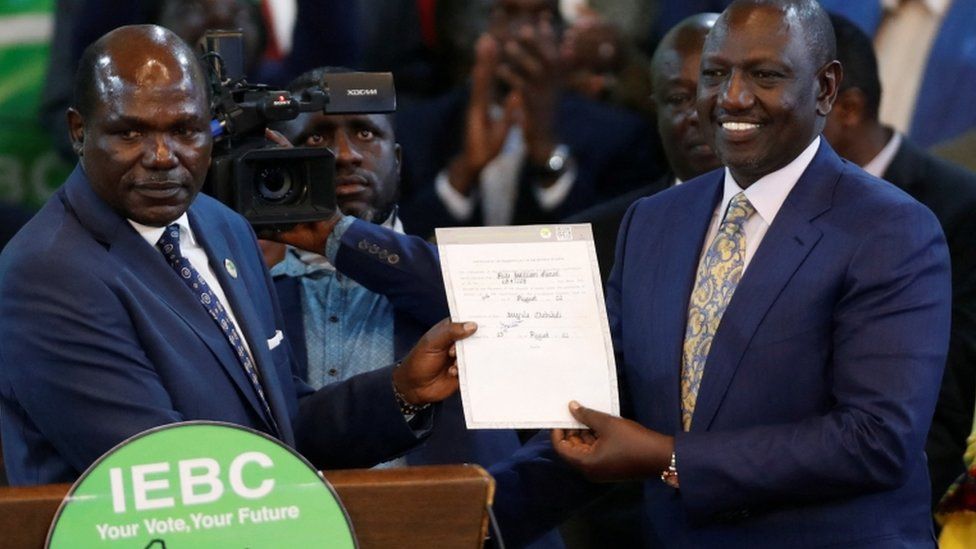 Kenya’s Supreme Court upheld William Ruto’s victory in last month’s presidential election, dismissing his rival Raila Odinga’s claims that the vote was marred by rigging and irregularities.
The seven-member court found no discrepancies in the vote tallies and no credible evidence that the electoral commission’s computer systems and transmission network had failed or been breached, Chief Justice Martha Koome said in an abridged ruling handed down in Nairobi, the capital, on Monday. Allegations that some citizens had been prevented from casting their votes or that ballot boxes were tampered with were unproven, she said.
“It is our finding that the declared president-elect attend 50% plus one of the votes cast” in accordance with the constitution, Koome said. “This is a unanimous decision of the court.”
The official results showed Ruto, who has served as deputy president since 2013, winning 50.5% support in the Aug. 9 vote and Odinga, a former prime minister, 48.8%. The judgment paves the way for Ruto, 55, to be sworn in as President Uhuru Kenyatta’s successor on Sept. 13.
The court’s decision is a major step toward ending political uncertainty in East Africa’s biggest economy after Odinga’s rejection of the results fanned anxiety among the nation’s bondholders. Investors will be watching closely for his reaction to the ruling, which could determine whether there will a repetition of protests and violence that ensued in the wake of previous disputed votes.
The yield on Kenya’s 2032 dollar bonds fell 28 basis points to 12.5% at 2:11 p.m. in Nairobi on Monday, while the shilling was little changed at 120.24 per dollar.
Upholding the presidential election results “is likely to raise investor confidence as a return to normalcy will be in sight,” Nairobi-based AIB-AXYS Africa said in emailed comments.
Odinga’s running-mate Martha Karua said on Twitter that she respected the court ruling but disagreed with it.
Ruto will have his work cut out for him, with the nation’s economic growth rate set to slow this year and the International Monetary Fund warning it is at high risk of debt distress. Kenya’s public debt-servicing costs are projected to climb to 1.39 trillion shillings ($11.6 billion) in the fiscal year through June 2023.