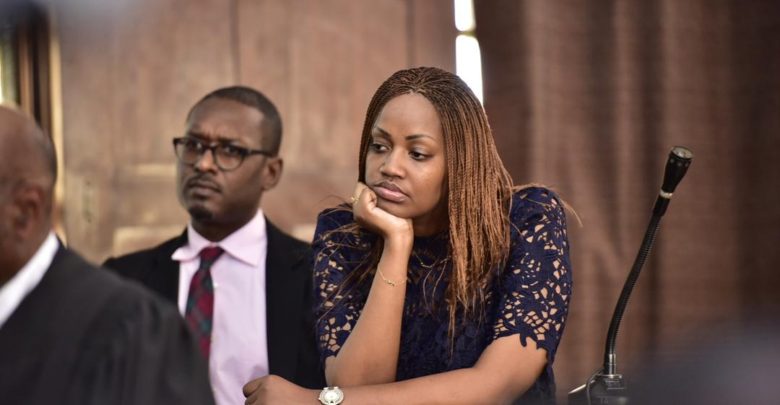 Kampala businessman Mathew Kanyamunyu, a prime suspect in the shooting of child rights activist Kenneth Akena Watmon, has this afternoon confessed to the crime and agreed to pay reparation for the offence.

Kanyamunyu was arrested in 2016 on suspicion that he drew a gun at Akena after he reportedly accidentally knocked his car in a parking lot in Lugogo, Kampala. Akena had reportedly gone to apologise to Kanyamunyu after the accident, but Kanyamunyu instead lowered the window of his car and shot him with a pistol at close range.

Akena died a few hours later at Norvic hospital along Bombo Road where he had been taken by the accused. Kanyamunyu has since then been on trial together with his Burundian girlfriend Cynthia Munwangari and sibling Joseph Kanyamunyu who allegedly hid the killer gun. But throughout the trial, Kanyamunyu and his girlfriend insisted that they only took Akena to hospital as good Samaritans.

But in an alleged dying declaration, Akena reportedly told his relatives that he was shot by the same people who took him to hospital. Last month, Kanyamunyu’s family sought the intervention of Acholi Religious Leaders Peace Initiative (ARLPI) and Acholi Cultural Institution to broker a reconciliation agreement between them and Akena’s family to find a closure to the case.

Dr John Baptist Odama, the Gulu Archbishop backed by Rwot David Onena Acana II, the paramount chief of Acholi persuaded Akena’s family who in turn opened up to the negotiations. The reconcilers summoned the two families for the first meeting that was held today in Gulu.

The meeting that was held under tents at Ker Kwaro Acholi compound was presided over by Rwot Acana II as a chief witness. A council of six elders cross-examined Kanyamunyu as a requisite step of prior to Mato Oput – a clan or family-centred reconciliation practice.

A family source privy to the negotiations says that Kanyamunyu made a step by step recount of what happened between him and Akena on November 12, 2016, at Forest Shopping mall in Lugogo before he pleaded for clemency from Ogom chiefs, Akena’s clan leaders.

“He admitted that he will make the same confession before the High court in Kampala where he is being prosecuted to allow him to enter a plea bargain,” a source said.

The same source added that after the confession, the elders on the protocol of Mato Oput made an assessment of 10 cows and three goats to be paid by Kanyamunyu’s family to which they agreed.

Under the ultimate Acholi tradition justice system of Mato Oput, the accused person must admit his/her mistake through a meaningful confession and must also accept to pay reparations for the damages caused.

Ambrose Olaa, the prime minister of Acholi Cultural Institution confirmed the reconciliation meeting. He said the exercise was conducted at Ker Kwaro Acholi by the Ogom clan under the Payira Chiefdom of Acholi ethnic group.

TThe trial of Kanyamunyu and his co-accused, was earlier this year adjourned indefinitely by presiding judge Stephen Mubiru, the Gulu resident judge. However, Akena’s family members remain optimistic about the pursuit of traditional justice by Kanyamunyu’s family will not derail them from continuing with criminal proceedings already before the court.