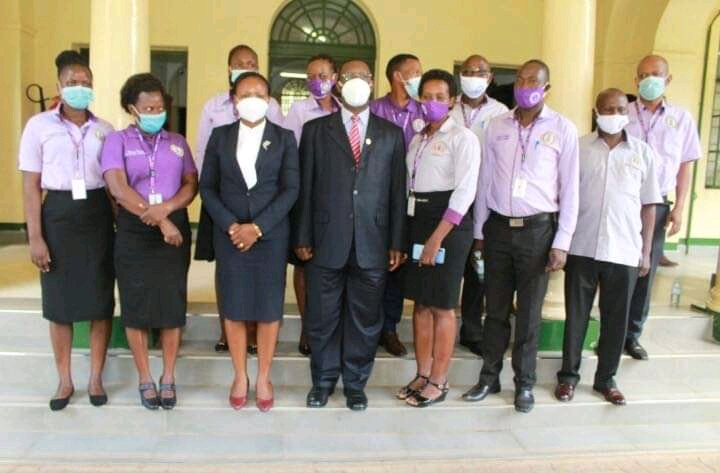 In the bid to fight graft in Uganda’s court’s, all workers that includes Court clerks and support staff will start dressing in uniforms as part of the efforts by the judiciary to fight corruption.

The purple uniform was officially unveiled by the Permanent Secretary to the Judiciary, Pius Bigirimana at the judicial headquarters in Kampala.

The purple uniform bears the name of the staff and their title embroiled in black colour on the right-hand side and the judiciary logo on the left-hand side.

While unveiling the uniforms, Bigirimana noted it is going to be easy to differentiate court staff from what he described as middlemen who have been pausing as judicial officers to defraud unsuspecting court users.

“The development is in line with the recommendations made by the 2020 Judiciary Anti-Corruption Task Force report, which emphasized staff uniforms for all support staff”. Said Bigirimana

He revealed that they intend to roll out the new uniforms in a phased manner starting May 1, 2021, with at least 450 court clerks and 100 drivers.

The Chief Registrar Sarah Langa noted that the uniforms will make it easy to identify and deal with crooks that have been impersonating court officials and extorting money from people.

Each of the beneficiaries received three sets of uniforms, which they are expected to wear at all times while on duty.

The 2019/2020 National Integrity Survey report released in February 2021 mentioned the Judiciary as the second most corrupt government Institution after Uganda Police Force.