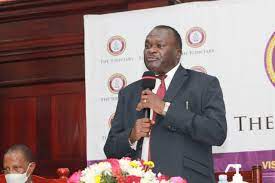 The judiciary has condemned the attempts by unscrupulous individuals who it said want to meddle in its affairs.

According to the judiciary, on June 20, 2022, the staff at Soroti High Court received a suspicious package with a warning letter addressed to the resident Judge, the assistant registrar, counsel and plaintiffs in a court case now a subject of police investigations.

In a statement, the institution said this act of cowardice is an unwarranted indirect affront on the independence of the Judiciary which is protected by the Constitution.

“Article 128 of the Constitution provides that no person or authority shall interfere with the courts or judicial officers in the exercise of their judicial functions. The Judiciary should be left to exercise its mandate to adjudicate,” the statement read in part.

Jameson Karemani, Public Relations Officer, at the judiciary said whoever wants to threaten judicial officers and the courts with a view of derailing justice should be brought to book and condemned.

He said the law provides for an appellate system for redress by aggrieved parties and as such there is no need to intimidate judicial officers as they dispense justice.

“We reassure court users and the public at large that the judiciary remains committed to administering justice to all without ill will, fear or favour,” he said.