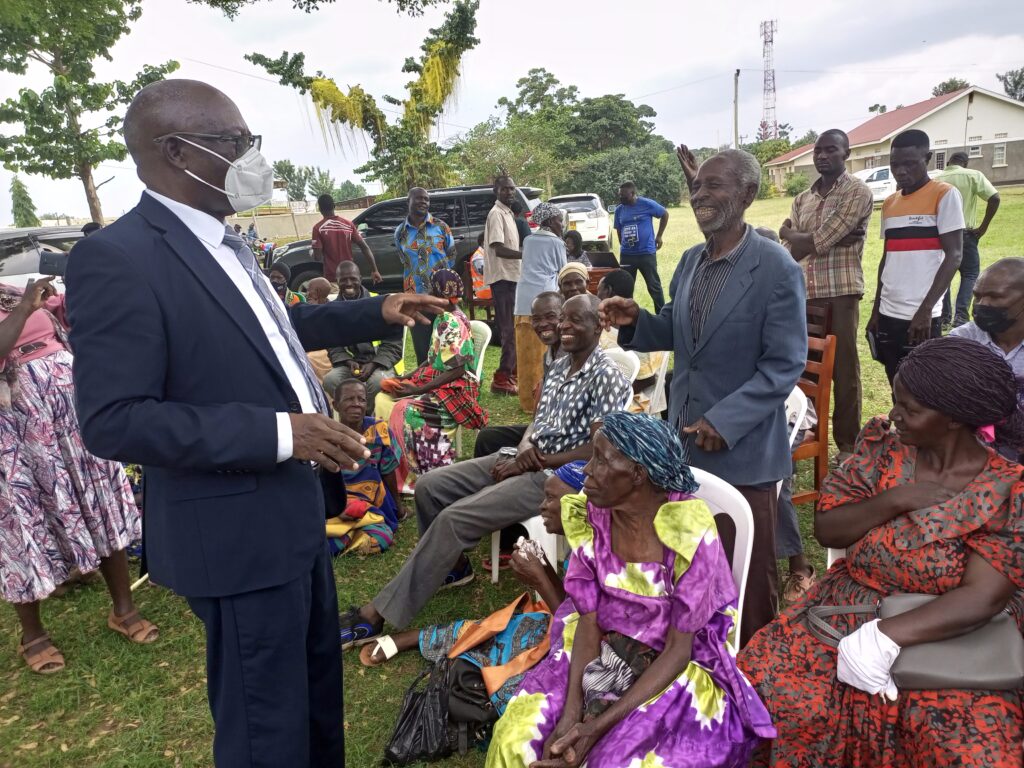 June 24, 2022, The Minister of State for Elderly Affairs, Hon. Mafwabi Dominic Gidudu, has reassured older persons that Government is taking all necessary steps to eliminate the challenges excluding some older persons from receiving the Social Assistance Grants for Empowerment (SAGE).
While on a monitoring and supervision visit of SAGE payments in Mbale and Soroti districts on Thursday, Hon. Gidudu noted that the Ministry had gotten wind of a number of issues including the lack of National Identity Cards, errors in details on the Cards, infirmness and hiccups in the payment system, which are disfranchising would-be beneficiaries of the monthly payments.
“The Ministry is woke to these challenges and we are working with, for example, the National Identification and Registration Authority (NIRA) to resolve issues on registering older persons to get National IDs and correcting the errors in existing IDs.” Hon. Gidudu said.
Older persons in Mbale observed that the NIRA field teams had wrongly captured the ages of some older persons, especially of those who only estimated their ages based on historical events.
“The registration officers were young and had no grasp of the historical timelines. They ended up underestimating many of the ages and now this has returned to eliminate some older persons from the Senior Citizens Grants,” they reported.
The Minister expounded that while changing details on IDs is a legal process which is cumbersome for older persons, the Ministry is partnering with NIRA and local governments to institute sub-county vetting committees that will work with Commissioners of Oath (Magistrates) to verify the correct age of the affected older persons.
“To test this approach, the exercise will begin with ten districts of Agago, Iganga, Lwengo, Budaka, Kakumiro, Maracha, Bundibugyo, Kotido, Ngora and Sheema and later rolled out to ensure that all affected individuals are covered.” Hon. Gidudu said.
He promised that once the errors are rectified, the beneficiaries would be immediately enrolled onto the Programme to start receiving their payments.
He revealed that the migration of beneficiaries from Post Bank to Centenary Bank, which is the new payments service provider, is almost getting completed, having experienced a few challenges at the peak of the COVID-19 pandemic.
Hon. Gidudu revealed that the Ministry and NIRA have since February this year been conducting a joint residual registration of Older Persons to acquire National IDs, which exercise had resulted into over 12,000 new National ID holders. He promised that the outreaches would continue to get onboard more older persons.
Under the grant, older persons receive Shs. 25,000 every month with the direct costs of transactions born by government.
Bugisu sub region, covering the districts of Mbale, Bududa, Manafwa, Namisindwa, Sironko, Bulambuli and Mbale City, has a total of 14,407 beneficiaries, 8,442 of whom are female and 5,965 male. Up to Shs. 10.105 billion has been paid out to beneficiaries in the region.
Shs. 1.388 billion has been paid out in Bududa, Shs. 1.517 billion in Manafwa, Shs. 1.910 billion in Mbale District, Shs. 1.035 billion in Namisindwa, Shs.2.682 billion in Sironko, Shs. 1.306 billion in Bulambuli and Shs. 265 million in Mbale City.
Meanwhile Soroti, which is one of the most recent districts to join the programme following the roll out in the Financial Year 2019/2020, currently has 2,074 beneficiaries who have since received Shs. 1.093 billion.
The Senior Community Development Officer, Aguti Esther, informed the Minister that beneficiary payments in Soroti have been successful with minimum complaints and maximum compliments to government.
“The Programme has not only empowered the older persons to live more dignified lives but has also improved on the livelihood of their dependents through the trickledown effect of the cash transfers.” Aguti said.
She added that the older persons can now contribute to schools fees of their grandchildren, medical bills and some have opened up businesses, which directly contributes revenue to government and consequently contributes to attaining Sustainable Development Goal 1 on poverty reduction and Sustainable Development Goal 10 on reducing income inequality.