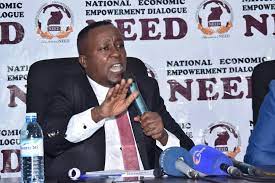 that there are a group of people in government that want to turn Ugandans into slaves in the next 20 or 30 years.
Kabuleta’s remarks followed comments from some residents from western Uganda who dismissed a common narrative that the region is more privileged compared to others.
Prossy Ayebare from Isingiro told journalists that unlike the common belief that the region is more developed, the wealth in the region is only shared among a small fraction of the population, who have deep connections with people in power.
Edwin Akoragye, from Mbarara said the entire region is currently plagued by land grabbing, adding these are targeting both government owned and private land.
“There are a lot of things happening in Ankole, but we are denied a chance to speak about them. Many Ugandans think that the issue of land grabbing is only here in Buganda region but it’s not. Many people in the same area don’t even have a place to grow food for their own families,” Ayebare said.
Speaking to the Nile Post, Kabuleta accused members of the first family and well-connected individuals with the regime of being part of the group that are grabbing public land, including that which belonged to ranches left by the Obote regime.
He explained that there are a lot of injustices taking place, adding that they are have instructed their regional coordinators to document all public land.
“Natural resources are being taken over by the rich and powerful people and eventually rule over the poor, that is what is happening. This regime is going to end; I can assure you that. There will be justice,” he stated.
Kabuleta claimed that this group of people in 1992 had a 50-year master plan to rule Uganda and create a scenario where some people are above others and part of that plan was getting money and giving it to their sons and go and start a money lending business.