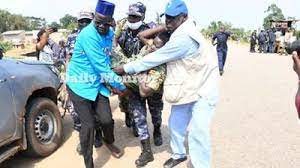 Over 5 police officers and soldiers following the convoy of the Forum for Democratic Change (FDC) presidential candidate Patrick Oboi Amuriat have been injured following a motor accident in Kyegegwa district.

The five were injured when a police pickup they were travelling in overturned at Kyatega village in Kakabara sub-county on Monday. Vincent Twesige, the Rwenzori West Regional Police spokesperson, says the police pickup Reg. No. UP 1302 lost control and rammed into an Electoral Commission double cabin Reg. No. UG 0815B.

The double cabin was carrying police officers assigned to guard Amuriat, who has embarked on his campaign trail in the districts of Tooro. Eyewitnesses say the police pickup was trying to overtake and block the EC double cabin that was part of Amuriat’s convoy heading to Kyenjojo district for a campaign rally and lost control in the processIt also rammed into a parked Bajaj motorcycle Reg. No. UEZ 582A. After the accident, Amuriat was seen helping to put the causalities onto a waiting double cabin that evacuated them for medical attention.

Before the accident, police and UPDF soldiers had engaged in running battles with Amuriat in Kyegegwa town council as they tried to block him from holding a procession through the area. Police also fired teargas in an attempt to disperse crowds that were following Amuriat.

Norman Turyatemba FDC’s communications personel has decried police actions, saying the accident because they were trying to block them from entering to Kyenjojo main town