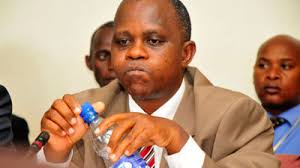 Convicted city lawyer Bob Kasango has died in prison due to heart-related complications, Prisons spokesperson Frank Baine has said. He passed away in Luzira prison on Saturday evening.

The flamboyant Kasango has been in prison on a journey of serving a 16-year sentence handed to him in 2018 by the Anti-Corruption court judge Margaret Tibulya for theft of Shs 15.4 billion meant for pensioners.

Kasango appealed the sentence, and the Court of Appeal justices led by Catherine Bamugemereire were yet to decide on his application. Kasango unsuccessfully applied for bail twice in the Court of Appeal. Earlier, in December 2017, Kasango was banned from practising law by the Uganda Law Council after he was found guilty of gross unethical conduct.

The Council’s disciplinary committee chaired by John Mary Kiwuuwa heard that Kasango had fleeced his client Vivine Mukuru and a property buyer, John Kaweesa of $193,200 (about Shs 707.8 million). This was reportedly in a transaction involving the purchase of a house in Kololo.

After purchasing the property, records indicate that shortly after Kaweesa had occupied the said house, another businessman Edward Kiyenje informed Kaweesa that he had already purchased the same house at $80,000 (about Shs 293.1 million).

Kasango received the money on behalf of his client in 2013, from the ministry of Lands.  He had earlier been acquitted by chief magistrate Jamson Karemani; but that ruling was quashed by High court judge Elizabeth Kabanda.

She convicted Kasango on two counts of uttering a false document and three counts of stealing by an agent and sent him back to the same magistrate Karemani for sentencing.

John Njoroge, a friend to Kasango will remember him for being kind.

“There are many times I and my family would have gone hungry if you were not there for me and although I had a job. You bought me my first car and even when I tried to pay you back you refused,” Njoroge wrote in tribute to the deceased.

Betty Amamukiror describes Kasango as a brilliant, humorous and powerful speaker who could charm an audience.

“Bob was eloquent, when he started to speak, you never wanted him to stop. I remember sitting through his defence and writing word per word as he presented his defence. I did this not because it’s what was expected of me, as a court reporter, but because his diction was too rich, beautifully and brilliantly put together. Sometimes, I would look at him and wonder if he indeed committed the crimes he was convicted for. He was too smart,” she said.

Fellow lawyer, Isaac Ssemakadde accuses the Uganda Law Society of abandoning the deceased to suffer the perils of being an unrepresented litigant throughout the several trials and tribulations during his life.

Uganda Law Society president Pheona Wall Nabasa says that it is very unfortunate for the crimes he was accused of and sentenced for, and with the way, court thought he would be a flight risk and never given bail to nurse his ailment.

“His incarceration had a great impact on the lawyers. But he was a kind brilliant man who was down to earth and we will remember him as a happy and jolly man. We are sorry to have lost him,” said Nabasa in a phone call.

She says when a member of ULS passes on, they usually join the family in burial arrangements. But for Kasango’s case, they are finding difficulties and technicalities since he died while in prison.