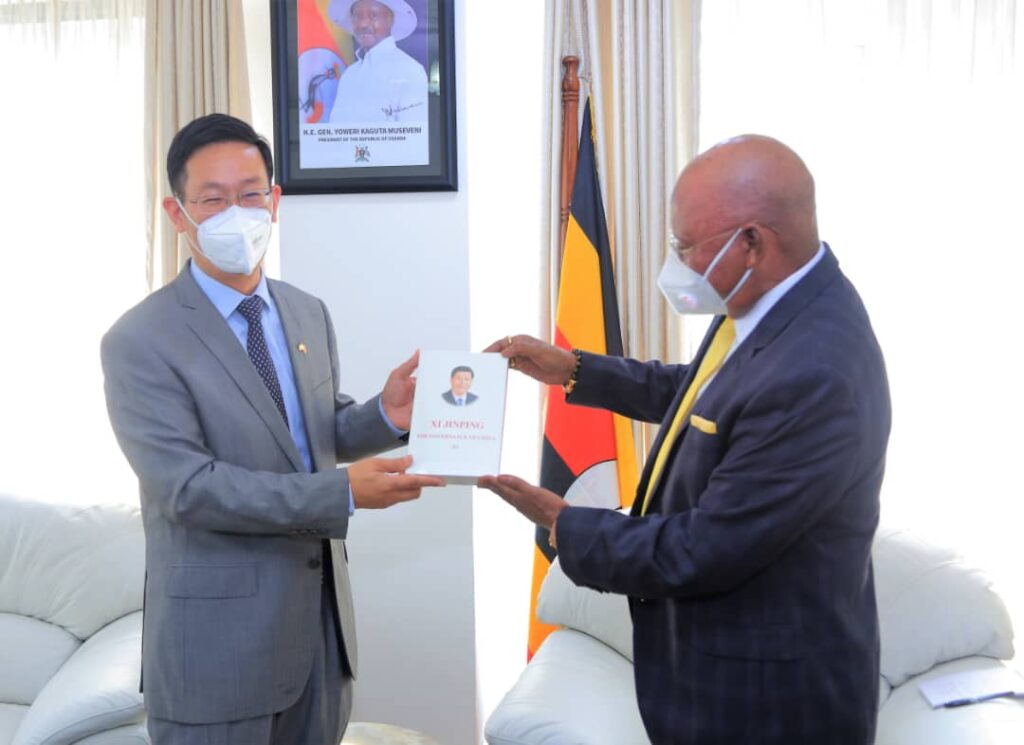 Hon. Gen. Abubaker Jeje ODONGO, the Minister of Foreign Affairs of the Republic of Uganda this morning received credentials H.E Zhang LIZHONG, the Ambassador-Designate of the People’s Republic of China to Uganda at the Ministry Headquarters.
The Minister, welcomed the Ambassador-Designate to Uganda and commended the excellent bilateral relations which are historic in nature and have progressed to the level of Comprehensive Cooperative Partnership (CCP).
Hon. Odongo further noted that both countries have exchanged high-level visits and enhanced cooperation in different fields such as implementation of several infrastructural projects (roads, power dams), development of industrial parks. The Standard Gauge Railway (SGR) remains a priority project for Government.
In regard to Bilateral trade and Investment, the Minister noted that China is now the largest source of Foreign Direct Investment (FDI). Hon. Odongo further underscored Uganda’s desire to enhance connectivity and boost trade by introducing direct air flights from Uganda to China (Guangzhou). He urged the Chinese Government to expedite the clearance procedures of the Bilateral Air Services Agreement for Uganda Airlines to operate direct flights to China.
At the multilateral level, the Minister noted that both Uganda and China continue to work together in providing support to each other on issues of core interest and major concerns.
Hon. Odongo also appreciated the interventions Chinese Government for the donations of PPE equipment and offer to donate vaccines to support the fight against COVID-19 Pandemic.
The Minister further more underscored the commitment of the Government of Uganda to enhance coordination and consultation so as to implement the outcomes of the Beijing Summit of the Forum on China-Africa Cooperation (FOCAC) and actively participate in Belt and Road cooperation to achieve win-win cooperation for the mutual benefit of both countries.
While presenting his credentials, H.E. Zhang thanked the Minister for the warm reception & hospitality accorded to him since his arrival in Uganda and conveyed a message from H.E Xi Jinping, President of People’s Republic of China congratulating H.E. Yoweri Kaguta MUSEVENI, upon his re-election as President of the Republic of Uganda.
He further reiterated that the relations between China and Uganda are historic since inception in 1962 and continue to grow from strength to strength. He attributed this to the able political leadership of both countries led by H.E Xi Jinping, President of People’s Republic of China and H.E. Yoweri Kaguta MUSEVENI, President of the Republic of Uganda.
The Ambassador Designate noted that both countries are strengthening these Bilateral ties in the political, security, economic, social, cultural and scientific fields and several Agreements and MoU’s have been signed between Uganda and different China Government Ministries, Provincial Governments and companies in various fields of cooperation in key sector areas of Agriculture, Education, Health, Infrastructural Development, Science and Technology to mention but a few.
In regard to Cooperation in Infrastructure development Amb. Zhang was pleased to note the ; Completion of the Kampala-Entebbe Expressway, a modern expressway, Completion and commissioning of the 183MW Isimba Hydro Power Plant and ongoing construction of the Karuma Hydro Power Plant (HPP). Over 8000 Ugandans have been employed as the project is being built; ongoing expansion of the Entebbe International Airport with overall progress for the upgrade standing at 75 percent level of completion and the completion of three phases of the National ICT backbone project.
He further reiterated the commitment the Government of the People’s Republic of China to continue supporting efforts in the fight against the COVID-19 Pandemic as well as other Government Initiatives aimed at promoting development and social economic transformation for the mutual benefit of both countries.
In conclusion, Hon. Odongo re-affirmed the provision of the Ministry’s necessary support and Technical assistance required in execution of his duties as the Ambassador of the People’s Republic of China to Uganda.