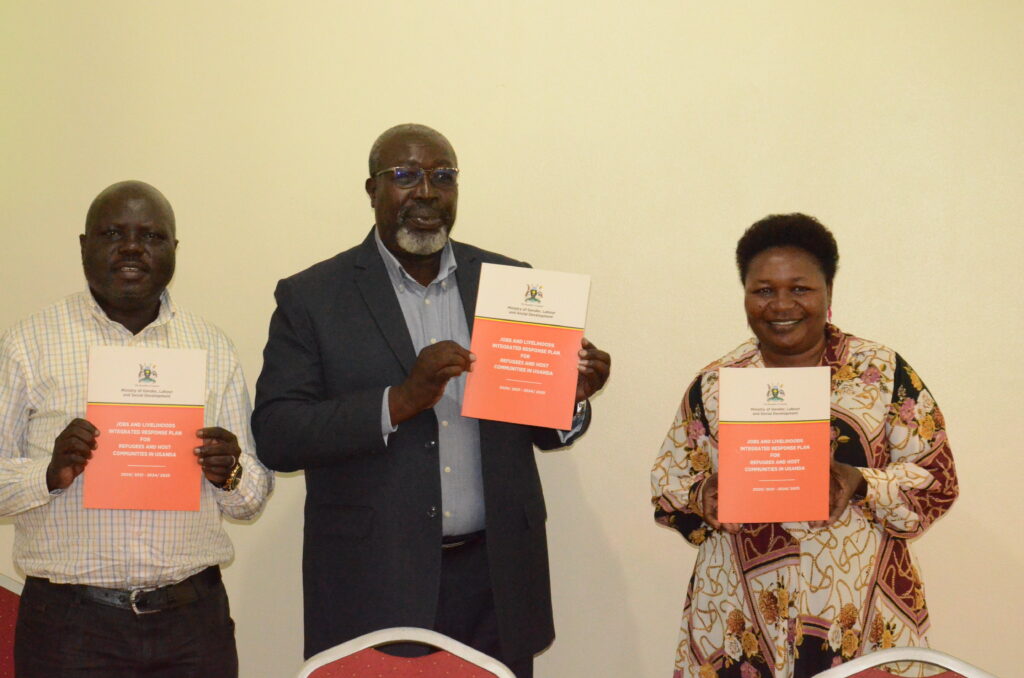 Minister of state for Labour Charles Engola (c),the Assistant commissioner Stephen Koma and Gulu RCC,Jane Frances Amongin launching the plan in Gulu.
Thursday, October 6, 2022, Cognizant of the unrest among refugees and their host communities, the Government has rolled out a new plan with redefined strategies to address the challenges.
The Minister of State for Labour, Employment and Industrial Relations, Col. (RTD) Okello Charles Engola Macodwogo, says the Jobs and Livelihoods Integrated Refugee Plan (JLIRP) will be the cornerstone for all interventions seeking to support refugees and their host communities.
“The plan is a response to the insurmountable livelihoods challenges faced by refugees and host communities in Uganda. It, therefore, proposes strategies of how to address these challenges to achieve a secure, self-reliant and resilient refugee and host communities in Uganda.” Engola noted.
He was speaking at the regional launches of the plan in Yumbe and Gulu districts, which climaxed in Gulu city on Thursday, October 6, 2022.
He cited the key challenges as: limited access to land; climate change; informalization of Medium and Small Enterprises, unemployment, weak coordination among partners, Gender Based Violence, the dwindling food ratios, declining donor support, and the effects of COVID 19 pandemic, among others.
He revealed that the Government of Uganda and its partners began developing the Jobs and Livelihoods Integrated Response Plan in 2018 and it officially got launched last year by the Prime Minister. He noted that the consultation process was inclusive and attracted various partners, the private sector and refugee hosting district local governments.
The plan has been developed for an integrated approach and is designed to run for five years, from June 2020 – June 2025 in the refugee hosting districts including; Madi Okollo, Terego, Adjumani, Kikuube, Yumbe, Obongi, Kiryandongo, Kyegegwa,Isingiro, Lamwo, Kampala, Kamwenge, and Koboko.
The plan is being implemented by sector leads, namely: Ministry of Gender, Labour and Social Development; Ministry of East Africa Affairs; Uganda Business and Technical Examinations Board; Ministry of Education and Sports; Ministry of Agriculture, Animal Industry and Fisheries; Ministry of Trade, Industry and Cooperatives and Ministry of Local Government.
The Minister commended the financial and technical support received from International Agencies like UNDP, UNHCR, WFP, World Bank, FAO, ILO, EU, BMZ, DFID, CRRF, USAID, and GIZ in developing the plan.
The Assistant Commissioner for District Inspection in the Ministry of Local Government, Stephen Idha Koma, said the plan is aligned to NDP III and as such district councils should embrace it.
“Whoever comes to implement a program on refugees and livelihoods should ensure that they fit within this plan” he noted adding: “If we want to enjoy the peace and security created by our government we should engage in meaningful jobs and livelihoods. This will further sustain the peace.”
The Resident City Commissioner Gulu, Jane Frances Amongin Okili appreciated the plan saying it would help in synchronizing programmes for refugees and their hosts while ensuring that both benefit from the development interventions.
Uganda operates an open-door policy for refugees, which has seen over 1.5 million refugees hosted in different parts of the country. This also makes Uganda the African country with the highest number of refugees.