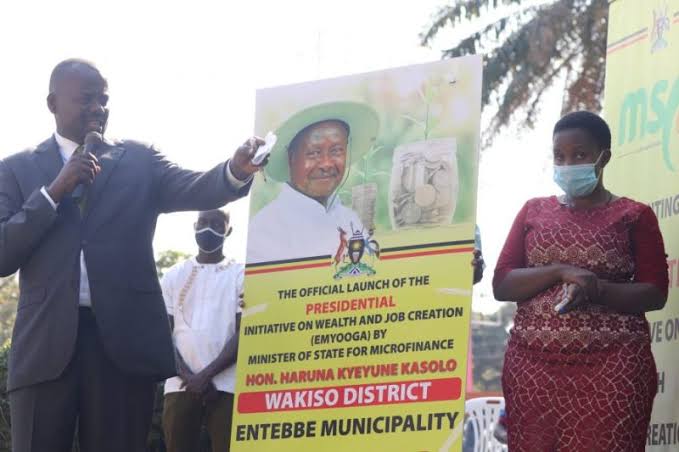 Police have started investigations into circumstances under which Wakiso district officials submitted a non-existent sacco pretending to be for journalists in a bid to benefit from the Emyooga money.
According to the Kampala Metropolitan deputy police spokesperson, Luke Owoyesigyire, three suspects include Moses Mabala, Henry Ssendegeya and John Kyolobi who are all commercial officers for Wakiso are being investigated and their statements have since been recorded.
“We are investigating circumstances under which Wakiso Town Council journalists sacco with account an account number in Pride microfinance, Nansana branch was created to benefit from Emyooga without officially being registered by Wakiso district local government as required,”Owoyesigyire said.
He explained that investigations commenced after complaints during a stakeholders’ meeting summoned by the Wakiso RDC Justine Mbabazi .
Investigations found out that the sacco had been submitted to benefit from the sh30 million seed capital to Microfinance Support Centre as one for journalists whereas its members were district officials.
However, the situation was saved when the Microfinance Support center refused to deposit money on the account since it had not been registered by the district local government.
“We now want to record statements from the members of the sacco and get proof they are journalists as well as record statements from LC chairpersons who recommended the association members,” Owoyesigyire said.
He said the investigations will further ascertain from the Microfinance Support Centre whether the funds for the sacco had been released and along the way they were withdrawn from the account.
In the past, there have been reports about ghost saccos receiving Emyooga funds in some parts of the country.
In Soroti, Police last month kicked off investigations into circumstances under which over Shs 54 million of Emyooga funds was withdrawn from three Sacco accounts in Finance Trust Bank Soroti Branch without the knowledge of the signatories.
According to police, district officials and staff at the bank were being investigated over the alleged involvement in the fraud that saw Gweri Women Entrepreneurs Sacco, Gweri Boda Boda Operators Sacco and Gweri Taxi Savings and Credit Cooperative Society loses money withdrawn from their bank account on three separate occasions.
“This is impressive and gives signals that the program will continue in the future. Emyooga is a very good idea. It will work since it creates a residential bank for these people. I have been told of a few cases of indiscipline but asked minister to deal with them.”
Previously The State Minister for Finance in charge of microfinance, Haruna Kasolo said RDCs and not government are to blame in case of any mess in Emyooga program.
“I was instructed by the president and cabinet that RDCs should head the Emyooga task force in every district and Microfinance Support Centre should only send money to an account of the sacco recommended by the RDC.
In case there is any ghost, then we need to ask the RDC why they sent Sacco’s details,” Kasolo said.