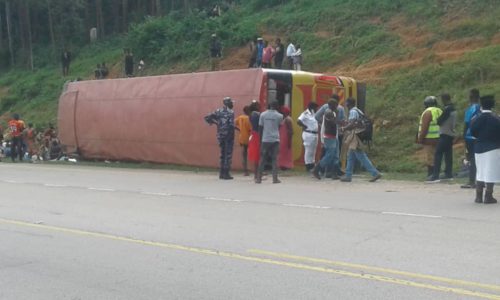 Over 30 in  a gateway bus on Sunday afternoon survived a nasty accident along the Ntungamo -Kabale road after is swerved off the road after failing to negotiate a sharp corner.

Elly Maate, the Kigezi Regional police Spokesperson, confirmed the incident and adding that the accident happened at Kafuka in Muhanga town council Rukiga district along the Ntungamo- Kabale road where a kabale bound Gateway Bus from kampala Registration number UBE 977S Isuzu Maroon in colour slid off the road.

Maate revealed that the bus failed to negotiate a sharp corner and fell on its side. that the accident happened at around 1.30 pm as no serious injuries were reported as most that were injured were rushed to an unknown hospital for treatment as the bus was towed to Muhanga police station as investigations in the matter go on.

“Victims are passengers number not yet established because some were rushed to unknown hospital while the Motor vehicle was towed to Muhanga Police Station pending Inspector Of Vehicles inspection as investigations go on,” said