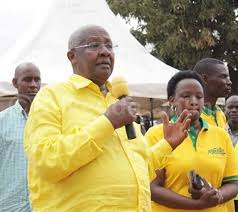 Foreign affairs minister Sam Kutesa on Wednesday told international delegates and journalists that the internet shutdown was necessary as some presidential candidates were allegedly planning to commit post-election violence calling it “Plan B”.From the beginning of the campaigns some candidates talked about Plan B which was to commit violent acts.Against this background, government deployed the army in Kampala and its surrounding areas because it was a threat to our democratic process. Ring domestic tranquility, the security and welfare of its citizens. The country has continued to enjoy peace without any major incidents of election violence, malpractice or common criminality.

We would like to reassure the international community that this tranquility will continue to prevail beyond the immediate aftermath of elections into the future. Underline that Uganda has sufficient capacity to deal with its affairs and rejects meddling in its affairs.We asked Facebook and Twitter to restore the closed government and NRM accounts but they didn’t heed. In response we shut them down to ensure equity.Some political leaders who lost election have continued to make inflammatory statements aimed at inciting people to violence.Government continues to urge them to desist from making such statements and if they feel aggrieved, to seek peaceful & lawful means of redress.As we get into the next chapter in our democratic journey, many lessons have been learnt and the government will continue to sensitise the people to understand and appreciate that in enjoying their rights, every person is under obligation to act in accordance with the law.In the face of Covid-19 pandemic, the government ensured favorable space for a free, fair, peaceful and inclusive process that allowed candidates competing for various positions to canvass support from the electorate.Messages of congratulations have been received. The observers have referred to the [presidential and Parliamentary] elections as peaceful, free and fair, and the results reflecting the will of the majority of our people.Uganda, like many countries around the world is still grappling with the consequences of Covid-19.Ever since its outbreak, government has prioritised the protection of human life. Since without the right to life it is impossible to enjoy other rights including right to vote.From the beginning of the campaigns these [opposition] candidates talked about a ‘Plan B.’ Plan B was a plan to commit violent acts and an insurgency, circumventing the demographic path.To this day they [opposition] have continued to stoke fear and incite violence which was a clear and present danger to the security and stability of the country and its citizensWould any country that upholds democratic values tolerate a ‘Plan B’? Uganda will certainly not accept this because we are committed to democracy.It’s against this background that the government deployed the army in Kampala and its surroundings. This was done to reassure the public that there would be order during the elections and to those who wanted to disrupt peace, the message was that please don’t dare.The temporary internet shutdown was a necessary step to stop the vitriolic language and incitement to violence which was a threat to our democratic process and the security of the country and its citizens.It’s noteworthy that despite efforts by internal and external actors to promote violence, the government has been able to preserve the peace.

Facebook and Twitter shut down government and NRM accounts leaving accounts of other political actors active. We considered this as an interference in our elections.We asked them to restore the closed accounts and they didn’t heed. In response we shut them down to ensure equity.We hope that all our partners understand the gravity & severity of statements made by some of the political leaders. The insurrection of Nov/2020 in Kampala & other areas of the country was unprecedented but not spontaneous. Some of these leaders aided & abetted rioters.The government appreciates the engagement with you because we are all partners. In this regard, we look forward to continued engagement and support in the government’s efforts to promote democracy and the well-being of Ugandans.Ugandans have spoken and the country must move on..