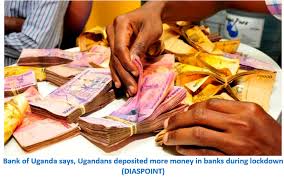 The government is considering taxing cash withdrawals from commercial banks, this newspaper has learnt.bit.ly/bettingoffersug

“Following our budget consultative meeting held on February 5th, 2021, at this ministry [of Finance] attended by officials from Uganda Communications Commission, Ugandan Revenue Authority, Telecom Operators and Bank of Uganda, it was proposed that we explore taxation of cash withdrawals, from commercial banks,” reads a February 9, letter written by Patrick Ocailip, the deputy secretary to the treasury in Ministry of Finance to the Governor, Bank of Uganda.

In the letter, Ocailip further tells the Governor, that the ministry wishes to seek his opinion on the proposal, and requests that he also avails data on different categories of withdrawals for further review and determination.

The proposal to tax cash withdrawals was reached at last week in a budget consultative meeting between the finance ministry and other stakeholders such as the Uganda Revenue Authority (URA), Uganda Communications Commission (UCC), telecom operators and Bank of Uganda (BoU).bit.ly/bettingoffersug

This, according to the government, will encourage cashless transactions and promote e-commerce, improve tax compliance in addition to raising revenue.

Currently, mobile money withdrawals are subject to a 0.5 per cent excise duty while agency banking and ATM withdrawals in commercial banks are not subject to the same tax. This, however, comes at a time when the Central Bank is working around the clock in a bid to drive Uganda into a cashless economy.

The Central Bank had also recently indicated that achieving a cashless economy would take longer than planned, because about 75 per cent of payments in Uganda are still made through cash.

Convincing Ugandans to have trust in the financial institutions was one of the efforts the Central bank was embarking on, as they had recently asked commercial banks to harmonise fees charged at Automated Teller Machines (ATMs), a discussion that is yet to take course among the stakeholders.

According to the 2019 Bank of Uganda annual report, local cash payments rose above the annual average of Shs423b to close at Shs544b. The growth represented an increase of 20 per cent from Shs455b recorded for the year ended June 2018.

Cash payments, which for a longtime have been one of the most popular forms of payment in Uganda, are still a popular choice among end-to-end low cost payments.bit.ly/bettingoffersug