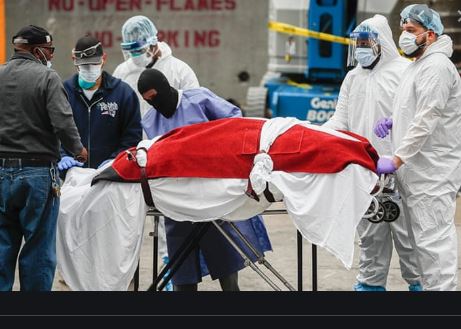 The situation in the United States of America is very worrying after the number of  Coronavirus (COVID-19) deaths exceeded 51,000 by end of Saturday April 25, 2020.

According to figures from Johns Hopkins University, the death toll in the United States surpassed 51,000 amid more than 890,000 cases of infections, sparking off even more worries across all the States.

With the US Coronavirus death toll topping 51,000 and nearly one in six workers out of a job, Georgia, Oklahoma and several other states took tentative steps at reopening businesses on Friday, despite disapproval from President Donald Trump and medical experts.

Fitness clubs, hair salons, tattoo parlours and some other workplaces were allowed to open their doors by Georgia Governor Brian Kemp, disregarding warnings from public health officials that easing restrictions too soon could lead to more infections and deaths, Reuters news agency reported.

Georgia, one of several states in the Deep South that waited until early April to mandate restrictions imposed weeks before across much of the rest of the country to curb the outbreak, has become a flashpoint in the debate over how and when the nation should return to work.

The reports came shortly after the World Health Organisation’s chief Tedros Adhanom Ghebreyesus had said the agency is teaming up with countries and partners worldwide to accelerate work on drugs and a vaccine for COVID-19, the disease caused by the Coronavirus.

Meanwhile, the number of positive cases in Qatar jumped by 761 in a 24-hour period, marking the Gulf country’s highest daily increase. The total number of cases reported in the country stands at 8,525, with 10 deaths.

It should be noted that over 195,000 people have died due to the pandemic, with 2.7 million infected globally, out of who almost some 781,000 have recovered.