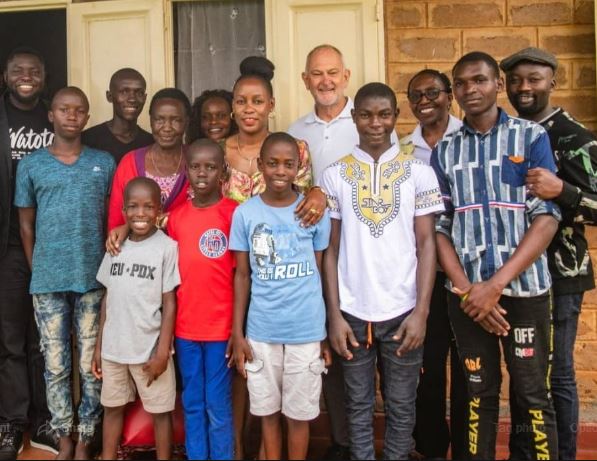 A very ardent follower of Watoto Ministry’s head pastor Gary Skinner, who is also a beneficiary of the same organisation, has assured State Minister for Youth and Children Affairs, Hon. Nakiwala Kiyingi, to back off matters concerning Watoto Child Care Ministries.

The concerned Born-Again believer identified as  Joel Kyakuwa, wrote a long missive to  Minister Nakiwala which has since gone viral on social media and it reads thus;

DISCLAIMER! I’m not the Watoto spokesperson and whatever you are about to read is entirely based on my opinion, thought or view and NOT of the ministry talked of!

As one of the former beneficiaries of Watoto Child Care Ministries, (an organisation which you seem to be obsessed with of recent), allow me take you through my experience for the time I was there (about 6 years)…

I joined in 2002 (in p.3) and was allocated to a house in the THEN Buloba children’s village. This was where I met my “to be” brothers and sisters.

In our house (#03), I was the 3rd oldest and the 2 other eldest were addressed to as “baaba” (Gganda title for elder brother or sister) which I call them even today. Such a title comes with respect and a great bond.

I like the other kids was given an adult who is trained to offer education with the help of text books and studying was usually done on our off days (every Monday), on the bus (as we travelled long distances between states) and from our hosts’ homes. This is quite enough time.

I returned later that year and joined the next class (p.4) seeing myself to a good performance. I sat my p.7 in 2006 and scored a first grade FROM ONE OF THE WATOTO SCHOOLS.

This is proof that my travelling didn’t retard my academic performance.

I won’t tell you beyond this point in regards to education for I left the ministry shortly after my p.7

…I also think it is considerable for one to sacrifice a year (while on tour) without “school” so as to study for the rest of the time. How do you see that?

Hope you’ve had a sip of water…

About your concern of children not leaving the ministry once they clock 18 can be shortly answered with this question: “Is it mandatory for a child to leave their parent’s home simply because they have grown? “Of course not!

Better still, a few weeks ago, you visited one of the Watoto villages (suubi) and I’m pretty sure you saw the homesteads. Those houses accommodate 9 people (ie a mother and 8 kids). These kids in there are raised as brothers and sisters and such a bond is created. In fact, I still catch up with my Watoto mother and siblings even when it has been 13 years since I left.

Those homes are not like dormitories where kids are allocated to a matron or warden and soon need a holiday from school, NO! I mean, who needs a break from their family?

At Watoto, we are family and family has no age restrictions, NONE. Whether I’m 9 or 90 years of age, #IamWatoto.

About the money which the choirs make benefiting the kids 100%, I ask you to read the DISCLAIMER again as I continue…

This money benefits “me” through an awesome education with facilities incomparable to our governments’ and private schools, through shelter, feeding, etc (check pictures attached if need be but I’m sure you saw everything I’m talking about here).

This money also caters for health wellbeing and as an example, about a fortnight ago, one of my sisters (name withheld) got a successful bone marrow transplant in India FULLY COURTESY OF WATOTO (you know how expensive that is, isn’t it.

You also claim that 48 of Watoto kids are “stranded” outside which is quite true but not for lack of funds or anything of the sort. We all know that since the covid-19 pandemic, countries (including ours) locked down and watoto couldn’t be an exception.

Watoto has had choirs travelling since the early 90’s and not at any one time have the choirs been stranded. Today, more than 100 choirs have travelled. Just so you know .

Watoto has raised and nurtured doctors, pharmacists, teachers, sportsmen, religious leaders, businessmen, lawyers, policemen, a member of parliament, a pilot, I mean, so many responsible and productive citizens of Uganda (as of Watoto mission) and I can give a name for each of the professions listed above.

Through Watoto, 10’s of thousands of kids are living a life which Ugandan streets wouldn’t have given them.

It really makes no sense trying to attack those who lift others / themselves up. Last time you were attacking freshkid, Lol.

Sorry for writing too much but maybe you needed it.

#Watoto, I can’t thank you enough for the 6 years you cared for me.

Note: In group photos attached, where you see a red line pointing, that is me. The author of this letter

I’M ENTIRELY RESPONSIBLE FOR ALL OF THE ABOVE AND IT IS WRITTEN ON PERSONAL VIEW.

Much love, God bless you