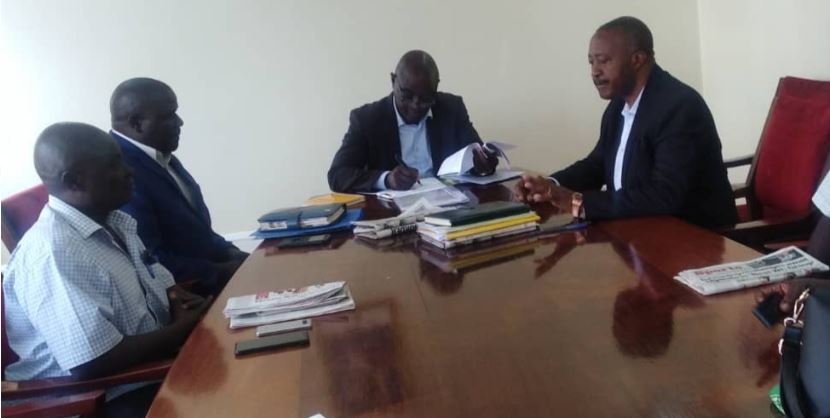 Board members of Uganda National Farmers Federation have asked the Minister of Agriculture, Animal Industry and Fisheries Hon. Vincent Sempijja, to support the Federation, such that it can implement its five-year strategic plan, in order to attain Farmer-led National development plan targets and the Agro-industrialization agenda.

The Board members led by Federation Secretary General Mr Mugoya Awali Ogonzaki, said the Federation is committed to ensuring that the agro-industrialization agenda remains on track.

“Farmers are the seed in the whole agro-industrialization agenda; they are the backbone of the economy. If the seed is not of good quality the yields will be very poor, it’s important the ministry supports us to achieve our plan to move the country forward.”

The Secretary General further reassured the Minister of the farmers’ Commitment to contribute highly to the economy’s Gross Domestic Product (GDP), feeding the country and also ensuring sustainable agriculture practices for better markets.

“ I am glad the Farmers are committed to working with government, but I’m more excited that you have a five-year strategic plan which is aligned to our national development plan, this way it means we are not competing but rather complementing government activities,” said Hon Vincent Minister Ssempijja.

The minister promised to quickly ensure that the Ministry supports most activities of the federation, saying they had already started with support to the Farmers agriculture show.

“We have multiple crises happening in the country today. We have climate change, locusts and the unstable weather patterns. We thus need to quickly partner with farmers to ensure that we fight these challenges, otherwise, we risk not attaining the goals we want.” Sempijja noted.

The Farmers’ Federation five-year strategic plan developed with support from the German government (GIZPrudev), was launched in 2017 by the Vice President His Excellency Edward Sekandi, at the Jinja agriculture showground.

But two years down the road the Federation is struggling to implement the plan due to financial hurdles but also with political leadership infights.

Mugoya further informed the Minister that the Federation currently has two parallel executive committees after a majority vote of no confidence was passed against Dr Dick Kamuganga who was Board chairman, (commonly referred to as President), which resulted in Dr Kamuganga’s calling a few farmers for an irregular meeting, during which he pushed them to vote into office another team for him to forcefully remain chair.

This resulted in the original Board taking legal action in courts of Law to stop Kamuganga and his team from occupying offices illegally. Our media house has established the matter is before Justice Musa Sekaana; hearing commenced and the concerned parties are awaiting judgement.

About UNFFE:
Uganda National Farmers Federation (UNFFE) is a private sector, umbrella membership, non-governmental Organization (NGO) in Uganda which advocates for, lobbies and articulates farmers’ developmental issues and programs. Its activities are supposed to reach grassroots farming communities in all corners of the country.

UNFFE Apex is supposed to be linked to the grassroots farmers through the member District Farmers Associations(DFAs) and the Commodity and Agro-input Associations.

The grassroots farmers are organized through Special Interest Groups (SIGs) which are mainly in the form of commodity-specific production and more recently financial services provider groups (VSLA groups).