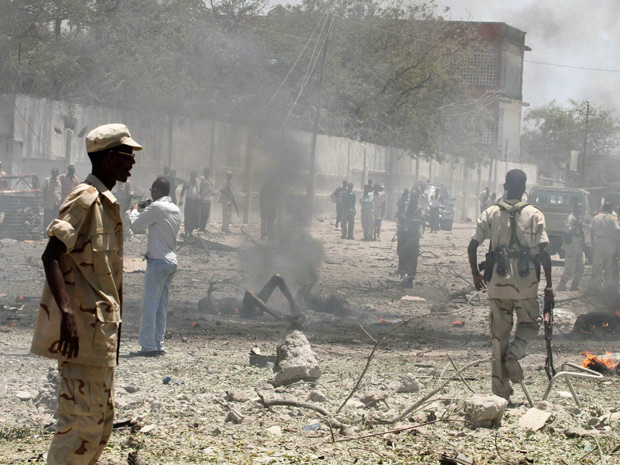 Several dead and around many more wounded Sunday evening after a thunderous car suicide bomber exploded the security gates of an upscale hotel open in the Lido beach area of Mogadishu, Somalia. In what was a terrifying and chaotic episode of violence.

According to Col. Ahmed Aden, a police officer, the attackers invaded the Elite Hotel, a new establishment popular amongst the young crowd of the capital city.

A scene of chaos at the Elite Hotel Sunday evening

Sadiq Adan Ali, a spokesman of the Somali police force, briefly described the nature of events, “Totally, those who have been killed or passed away in the accident, the attack, were 16. Eleven (of them were) Somali civilians and five of them terrorists. The other remaining was 13 wounded or injured persons.”

The nation’s security forces managed to subdue the situation after a nearly 5-hour siege which ended in the taking the lives of the four remaining assailants. They were rebels hailing from the Islamic extremist group Al-Shabab, allies of Al-Qaida and had taken hostages of young men and women at dinner at the site. All hostages were rescued and evacuated and ambulance workers at the scene reported that at least 28 people had been wounded.

Earlier this year, Somalia had a spate of bomb attacks. This recent event has shattered months of tranquillity.

Somalia plunged into chaos after the 1991 overthrow of then-President Siad Barre’s military regime, leading to years of clan warfare followed by the rise of Al-Shabaab which once controlled large parts of the country and Mogadishu. Al-Shabaab was driven out of the capital in 2011, but its militants continue to wage war against the government, carrying out regular attacks.

Support for victims of the terrorist attack in Somalia Sunday evening

The Islamist extremist group has targeted hotels multiple times over the years, including in February 2019 when it killed at least 20 people in a car bomb and gun attack on a hotel in Mogadishu that lasted for nearly 24 hours. A month before that, Al-Shabaab killed 21 people in a siege on an upscale hotel in the Kenyan capital Nairobi, an assault that highlighted its ability to expand its network beyond Somalia’s borders. Its last major attack in Mogadishu was in December 2019, when it slaughtered 81 people by detonating a vehicle packed with explosives.

Somalia senior analyst for International Crisis Group, Omar Mahmood, expressed the challenges in knowing whether the relative lull in the group’s terrorist activity this year reflects a capacity improvement on the part of Somali security forces or a change in strategy by Al-Shabaab.