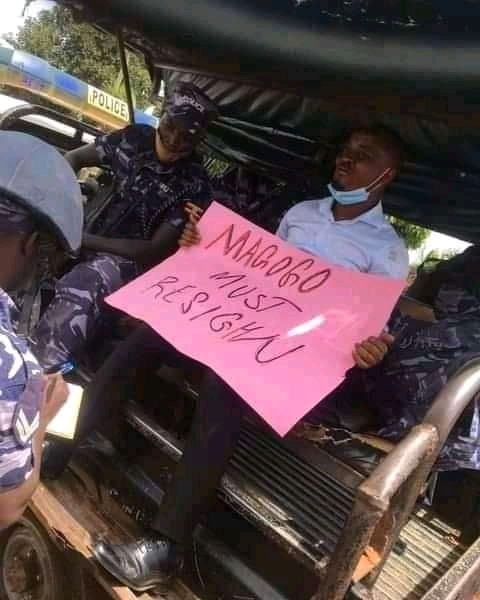 Before the peaceful demonstration, Mutyaba in the company of youths said that he is fighting for the rights of football players and will continue to raise this voic because he is not intimidated.

After a verbal warning by Mike Sulaiman Mutyaba and a group of footballers carried placards with written messages of grief and calling FUFA president  Moses Magogo to step down.

Upon reaching FUFA house Mutyaba was arrested and brutally beaten up by FUFA security guards before police’s intervention, leaving him with bodly injuries, later he was arrested and driven to Old Kampala Police where he was released without any charges.

Mutyaba’s concern is about the National team player’s salaries, which he claims that it is being embezzled by FUFA president and his team at FUFA house at Mengo.

Mutyaba is calling for transparency from FUFA leadership under the newly elected Buyende MP Moses Magogo, he also call for proper accountability on player’s allowances and salaries on international games.

Over the past years FUFA house has been under fire accelerated by the likes of Allan Sewanyana, Dan Walusimbi, Kavuma Kabenge questioning soccer governing body accountability.

It should be noted that Mutyaba’s breakthrough came during the school games in Wakiso District during the post primary games where St Mary’s Kitende picked him, he featured on a youth team that played Tivoli Cup that took place in Norway, Sweden and Denmark where he scored 36 goals.

Because of his skill, he attracted the attention of Fulham, but since he had stayed in the UK illegally, he was deported

and slapped with a five-year travel ban.

Upon settling in Uganda, he played for clubs like, Bunamwaya, KCCA, Express Fc, Vipers and Africa giants TP Mazembe  of DR. Congo and El Merikkh of Sudan.