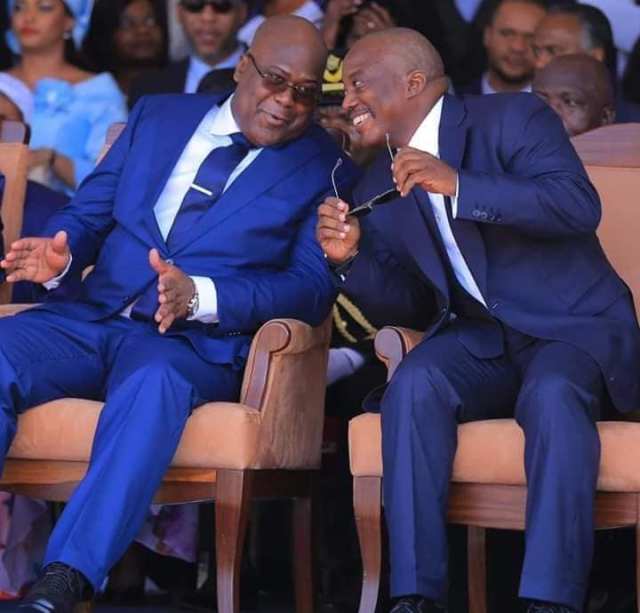 Bestowed with the title “Senator for Life”, former president Joseph Kabila made a big comeback on the Congolese political stage during the new parliamentary session. His resurfacing came as a surprise, though the 2023 presidential election is already on everyone’s minds.

“Joseph Kabila’s return is not a slogan – it’s a reality. He’s going to return to power and we are working towards that goal,” said Claude Nyamugabo, minister of environment and sustainable development. He has been making the rounds of the Haut-Katanga and Lualaba provinces since early last week and was in Kolwezi on official business to evaluate the environmental impact of mining operations when he made this remark, which has reverberated like an echo back to top party officials in Kinshasa.

What’s more, his words have a certain weight. Formerly governor of South Kivu, Nyamugabo is a high-ranking official in the People’s Party for Reconstruction and Democracy (PPRD), the former Congolese president’s political party. Nyamugabo’s comment also comes at an unusual time.

On Tuesday, 15 September, Kabila made his official comeback on the Congolese political stage, although he has never entirely abandoned it since he left office. With his bushy, greying beard – the very same one he shaved off for Félix Tshisekedi’s inauguration ceremony on 24 January 2019 – and girded with his “Senator for Life” scarf, Kabila made a grand entrance.

Solemnly welcomed by Bureau of the Senate members, accompanied by Prime Minister Sylvestre Ilunga Ilunkamba and National Assembly President Jeanine Mabunda, both members of Kabila’s party and invited for the upper house’s opening session, the ex-president stayed mum about the political environment. Posing for a selfie here, making a friendly gesture there, Kabila, flashing a calm smile, played the role of a relaxed guest, as if to reassure the room.

As usual, he kept his visit under wraps until the last minute. “Only a few top officials were given advance notice, just a few minutes before he arrived at the People’s Palace,” said a source close to the former president. The publicity stunt was a hit, as photos were widely shared and comments flourished on social media, while the Congolese and international press published articles about the surprise.

The skillfully staged event somewhat overshadowed another function taking place a stone’s throw away from the People’s Palace at the very same moment: a funeral Mass at Our Lady of the Congo Cathedral to celebrate the life of Germaine Djembo, the Congolese president’s sister-in-law, with Denis Sassou Nguesso and Tshisekedi in attendance.

More importantly, Kabila’s resurfacing comes at a time when, the day before the new parliamentary session, Néhémie Mwilanya Wilondja, coordinator for the Common Front for Congo (FCC, the coalition including Kabila’s PPRD), was presenting an overview before the MPs and senators loyal to the former president of the talks under way with Tshisekedi’s Cap for Change (CACH) coalition. For the first time, Mwilanya mentioned the content of the agreement binding Tshisekedi to Kabila, which provides that the Congolese presidency go to a FCC member in 2023.

For Kabila, taking part in the new parliamentary session provided “a way to return front and centre on the political stage and to display his determination in person after a period of physical withdrawal”, said Martin Ziakwau Lembisa, professor at the Information and Communication Sciences Institute of Kinshasa.

According to an insider source, “Kabila felt obligated to reassure his majority by making an appearance”. In fact, his supporters have been destabilised by events in recent weeks. At the beginning of July, although the FCC has a majority in the Assembly and the Senate, and boasts several ministers – including the prime minister – the party suffered a heavy defeat.

The controversial draft law on justice reform, put forward by pro-Kabila MPs, was blocked by the Assembly. The legislative body suspended the review of the text against a backdrop of protests, growing tensions with their CACH “allies” and after President Tshisekedi took a public stance against the reform.

“Maintaining the balance that forms the basis of the ruling coalition is one of the roles he intends to fulfill, and this is the message he wanted to send by showing up at the Senate,” said a source close to Kabila.

The exercise was clearly appreciated in the FCC’s ranks. “He promised that he would respect the constitution, and he did just that. He didn’t stand for a third consecutive term. Today, he has fulfilled all the requirements of the law by assuming his new position, albeit honorary, of Senator for Life,” Mwilanya said. Modeste Bahati Lukwebo, an FCC breakaway, saw Kabila’s return as a gesture “of respect” towards government institutions.

Augustin Kabuya, secretary general of the Union for Democracy and Social Progress (UDPS), viewed Kabila’s Senate appearance as his way of acknowledging that “things have changed” and that the former president “belongs in the Parliament and not elsewhere”.

A display of power

The trouble is, the welcome reserved for Kabila was quite the departure from how his senator colleagues were received. He was seated next to the guests of honour, including the prime minister and National Assembly president, rather than in the spot he is supposed to occupy as senator, regardless of his “Senator for Life” title. It was almost as if to show that he was none other than the former president of the Republic and current parliamentary majority leader, and not just “any” senator.

Moreover, this display of political power preceded a meeting between Kabila and Tshisekedi on Sunday, 20 September. The long-planned meeting, which took place after being postponed several times, between the two men served as a way to show that FCC and CACH’s split is not yet complete, for the time being, despite tensions and many differences of opinion between both coalition’s top brass and activists.

According to political analyst Martin Ziakwau, Kabila’s return to the Senate can be interpreted two different ways in light of the current situation: “Either the FCC is looking to persuade CACH of the advantages that need to be preserved and that their current partnership should be strengthened, or it intends to show that it is open to a future power struggle with an uncertain outcome.”