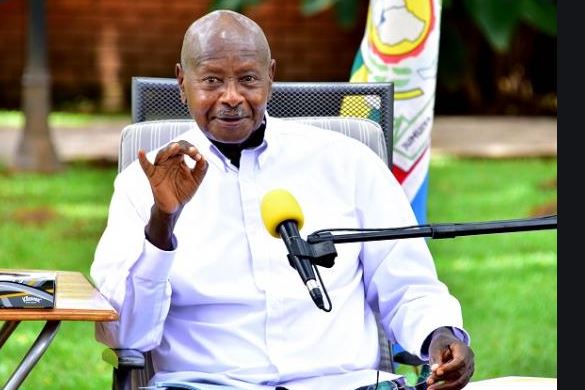 President Yoweri Museveni has said that the NRM made developing Uganda an easy job for everyone to see.

The President was speaking after flagging off the reconstruction of the 86km Mityana-Mubende road and the upgrading of roads in Mityana municipality on Wednesday.

“Developing a country is not an easy job but NRM made it easy. The NRM government has focused on performing its duties and the people should also perform their own duties,”Museveni said.

Commenting about the duties of a good citizen, the President said one must fight poverty, avoid alcoholism, live a healthy life free from HIV/ AIDS and supporting the NRM as their fourth duty.

“Avoid HIV/ AIDS, alcohol and drugs.I am 76 years but if you want to start a fight with me, I warmly welcome you. This decadent lifestyle which some Ugandans like is not acceptable,” he said.

“You also have a duty to support the NRM because it has been able to stabilize Uganda. Many think the peace that Ugandans have enjoyed for 35 years is in mere words but we fought for it. That is another reason why the fourth job that our people have is supporting the NRM.”

Commenting on the 86km Mityana-Mubende road, Museveni said government will work on many other roads including the Myanzi-Kassanda-Kiboga, Mityana- Kasaka and the Mityana-Ssekanyonyi-Busunju roads among others.

Speaking in Luganda, the President told the people at the function who mainly comprised of officials from Mityana district Local Government and others from the Uganda National Roads Authority that Ugandans should vote NRM for the development to continue uninterrupted.

“You should ensure the NRM continues with its job and Uganda will be fun living in ,” Museveni said.

The project to reconstruct the 86 Mityana- Mubende road and upgrading of the Mityana town roads will cost a total of shs395 billion which is all government money.

The construction works will be done by Energo Projekt.