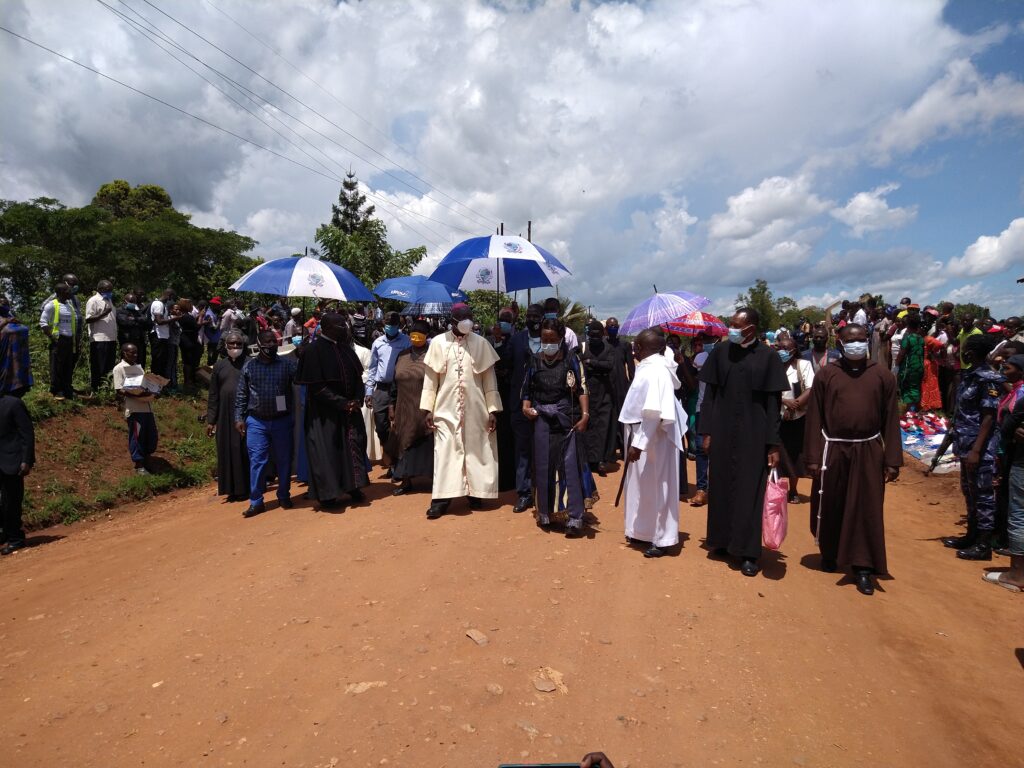 Fallen Archbishop Kizito Lwanga’s body has today touched the ground of his ancestral village of Kyabakadde in Kyampisi sub county Mukono district were he was prayed for and remembered.

The body arrived at 1:45 pm by the Updf helicopter amidst tears from the mourners, at Kyabakade parish playground, minister Nakiwala Kiyingi on behalf of the government, handed over the body to Lugazi diocese Bishop, Christopher Kakooza.

Later the body of the Archbishop was driven to St. Charles Lwanga Kyabakade parish church by Uganda funeral services, amidst tight security with sniffer dogs from Uganda police.

Fr. Pierre Kisangani of st. Charles Lwanga Kyabakade parish, said that we are proud of Archbishop Lwanga because he offered us a magnificent church, and lobbied for a parish from Lugazi diocese Bishop Matthew Ssekamanya.

“It was the late bishop Lwanga sweat that we managed to attain Kyabakade parish status” said Fr. Kisangani.

While giving out his message, the Lugazi Diocese Bishop, Christopher Kakooza hailed the fallen man of God for being the voice of the voiceless.

“The late Cyprian Kizito has been an advocate to the oppressed; he would come out and condemn the wrong” said Kakooza.

Before Easter season we had a phone conversation with Archbishop Lwanga and he said to me, that I should call a meeting for all members of central Buganda episcopalians and I replied to him that lets meet after easter, but it unfortunate that the meeting is full of tears with his body lying before us”  Revealed bishop Kakooza.

On behalf of the inter religious council and Uganda Joint christian council, the Mukono Diocese Bishop James William Ssebagala, praised Archbishop Lwanga as a peace loving man who always loved and preached peace in his sermons.

Ssebagala added that Lwanga was a hard working person who ensured that there was development in the places he served.

President Museveni in a message read to him by Minister J.C Muyingo, Museveni thanked the family of the late Kizito Lwanga and the people of Kyabakadde for raising up and moulding Archbishop Lwanga because he has diligently worked for the development of the country spiritually and economically.

Drama ensued when the residents of Kyabakade village were denied to view the body of the Archbishop with an excuse of time.

“How can these people deny us a chance to see the body? How can they dictate that the body should not enter his ancestral home? Asked angry residents.

The master of ceremony told the mourners that they should go to Namugongo for public viewing of the body, a statement that pissed off the mourners of Kyabakade village and left the function cursing.