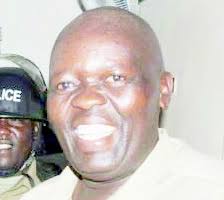 State House Anti-Corruption operatives have arrested a fierce Moses Kirunda, He has been on wanted after the shooting dead of a businessman in Nateete.
Moses Kirunda, who also demolished a church in Ndeeba last year, was hiding in Lungujja, where he was found by the operatives.
Kirunda, Maj Nelson Kyatuka, a Uganda People’s Defence Forces (UPDF) soldier attached to the Chieftaincy of Military Intelligence (CMI), and a police officer yet to be identified, are alleged to have participated in the murder of a businessman, Magidu Mugwanya, at Nateete, on July 14.
Kampala Metropolitan police deputy spokesperson Luke Owoyesigyire confirmed the arrest, He was arrested by the State House Anti-Corruption Unit and the police have been able to record his statement. He has been given police bail as investigation continues.
Kirunda denied shooting the deceased, but put it on Maj Kyatuka, according to the police.
Witnesses say on the fateful day, Mugwanya had parked his car on the roadside when he saw a woman crying and seeking help.
The woman was being dragged by three men into a car at night. Mugwanya reportedly moved out of his car to help the woman, but one of the three men shot him in the chest, despite identifying himself and raising his hands. He died on the spot and the suspects fled the scene.
Last Monday, Maj Kyatuka was charged with one count of murder and two counts of failure to protect war materials in the Makindye-based court martial, charges he denies.
He was remanded to Makindye Military Police Barracks until August 25
Police and CMI have been carrying out parallel investigations of the murder of Mugwanya.
Last week, the CMI produced Maj Kyatuka in a military court weeks after the police detectives had submitted their file to the Director of Public Prosecutions. The DPP hasn’t returned the file to police since.