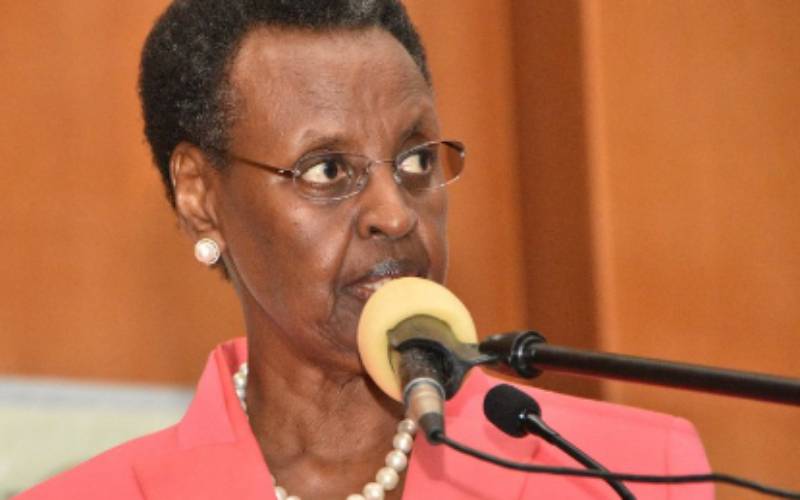 The Minister of Education and Sports, Janet Kataha Museveni has directed authorities at the Uganda National Examinations Board (UNEB) to ensure that P.7 candidates who have been isolated as Ebola suspects write their final examination.

The Minister made the comments in her public statement on Ebola and the Primary Leaving Examination (PLE), encouraging UNEB to coordinate with the ministry of health to make the necessary arrangements.

“No Ebola contact or case that is willing to sit their end of cycle exams should be denied the opportunity to sit their exams…We have guided UNEB to ensure that as much as possible, learners affected by the Ebola Virus Disease, either as case or identified contacts sit their examination from the very schools they have been studying from…,” her message reads in part.

According to the available information 27 Primary Seven candidates are currently isolated after having been in contact with peers who tested positive for the lethal illness.

Two weeks ago, there were six confirmed cases of Ebola virus disease among primary school learners in three separate schools within Lubaga division.

It was noted that three of them contracted the virus from their uncle who was visiting from Kasanda District.

The uncle spent a night at their home before he was taken to Mulago National Referral Hospital for treatment. He died at the hospital.

Later on, the ministry of health picked 170 contacts to six and placed them under isolation for close monitoring.

Meanwhile, The Minister has also advised that arrangements should be made to ensure these learners are not moved around “they will stay where they are but they will be empowered to do their examinations.”

She added that if the affected learners are from neighbouring schools, the health ministry and UNEB should make arrangements to see how they can be transported safely to sit their examination from the same centre together.

The Director of Public Health, Dr Daniel Kyabayinze, told our reporter on Thursday night that all of the candidates who are now being held in isolation are healthy enough to take their exams. The director also pointed out that since the 27 are from the same school, if they are to sit for exams they should occupy the same room.

“They are only suspects, and in the two weeks that they have been isolated, they haven’t shown any signs or symptoms of the disease. They are fit to take their test. However, the school must take precautions into consideration,” said Dr Kyabayinze.

When our reporter asked how they would be monitored, given exam papers, and how the papers would be handled afterwards, Dr Kyabayinze responded that those that will handle these pupils shouldn’t be afraid because they cannot spread Ebola.

“I am aware that our folks may be anxious. There are many uncertainties around how to handle the exams and so forth, but it is important to remember that these kids will have spent three weeks in isolation at the time of the sitting. They have not yet displayed any Ebola symptoms. They cannot spread Ebola and we should not stigmatize them since that might affect their performance,” he explained.

According to the UNEB schedule, primary seven candidates will start their final examination on November 7th with a briefing before embarking on writing two papers on each of the subsequent two days.

Before the minister’s directive, UNEB had envisioned such a scenario the day before the senior four examinations. At that time, the worry was among candidates in Mubende and Kassanda districts.

According to their plan then, any suspected learner would be allowed to sit in an isolated place at the centre to write their examinations. They had however noted that learners who are institutionalized in hospital facilities could not be given papers. Luckily, no single case has been identified among the senior four candidates.

Furthermore, Ms Museveni also noted that her ministry together with their health counterparts have started setting up a plan to ensure that once candidates complete their examinations in the districts currently under lockdown; that is Mubende and Kassanda, are able to safely return to their respective homes.

According to the current lockdown restrictions, no one is allowed to leave Mubende and Kassanda districts.

Yet, there are many learners studying from these districts coming from many other parts of the country. Even while the minister acknowledged that there is a plan to guarantee that students return home safely, the preparations have not yet been made public.

However, it should be remembered that during the COVID-19 time, the transportation of students back to their homes was poorly handled, leaving many of them stuck in taxi parks. There were also stories about how students, particularly those from urban areas, ended up spreading the disease to rural areas.