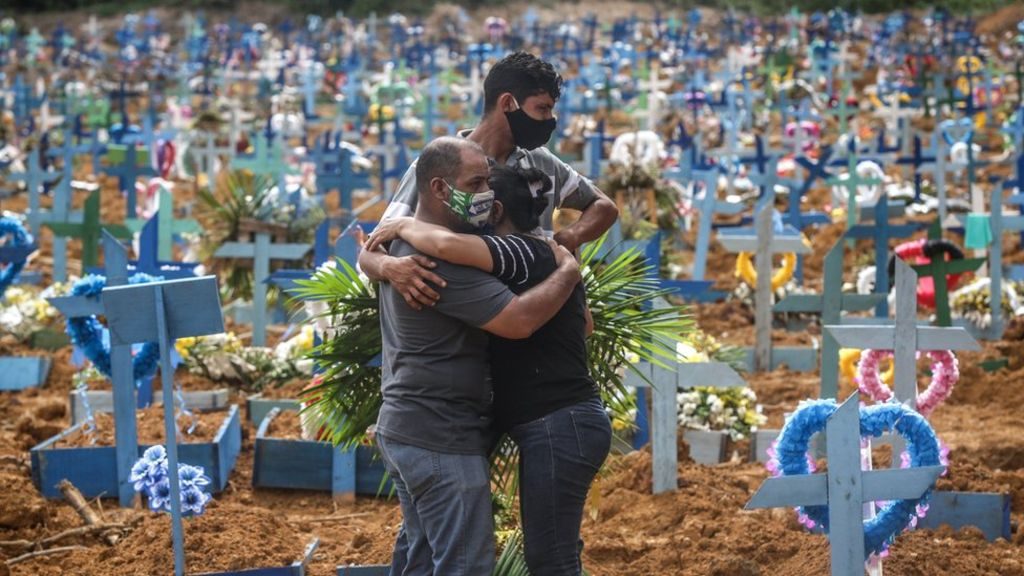 Brazil has become the second country, after the USA, to register more than 50,000 deaths from COVD-19.

It comes amid growing political unrest and a few days after the country confirmed more than one million Coronavirus infections.

Experts warn that the peak of the outbreak in Brazil is still weeks away.

The World Health Organization (WHO) has recorded the biggest one-day increase in cases, with the Americas responsible for most of the new infections.

However, the growing outbreak did not stop thousands of supporters and opponents of Brazil’s far-right President Jair Bolsonaro from taking to the streets in rival protests on Sunday.

Anti-government demonstrators are calling for Bolsonaro to be impeached. It follows the arrest on Thursday of a former aide and family friend who is accused of corruption.

His supporters say Congress and the Supreme Court are trying to curb his powers.

Anti-government demonstrators gathered in cities including São Paulo on Sunday.

Bolsonaro has also been heavily criticised for his response to the Coronavirus outbreak. He has opposed lockdowns and openly disagreed with advice from his government’s own health ministry.

On Sunday, the ministry announced that 641 more deaths had been registered in the past 24 hours, taking the total to 50,617. Over the same period it also registered more than 17,000 new infections.

Only the US has fared worse, with 2.2 million cases and nearly 120,000 deaths. Brazil becomes second country to hit one million cases

Bolsonaro argues that the economic impact of the measures will be much bigger than the virus itself, a position shared by many. But his overall approach to the crisis has led to the resignation of two doctors as health minister.

There was no national lockdown, but states and cities adopted their own measures. After months of restrictions, some are slowly being lifted, even though infection levels remain high.

There is still concern that the health system will be unable to cope in some places, and that the disease is spreading faster in deprived neighbourhoods and remote areas, such as indigenous communities, where access to adequate care is difficult.

As well as the pandemic, Bolsonaro is facing a growing political crisis. He is under investigation for allegedly trying to interfere with the police for political motives, which he denies, while the Supreme Court is carrying out two separate inquiries into his allies.

On Sunday, police in the capital, Brasilia, kept rival groups apart as they marched outside Congress and the Supreme Court buildings. Other large gatherings took place in São Paulo and Rio de Janeiro.