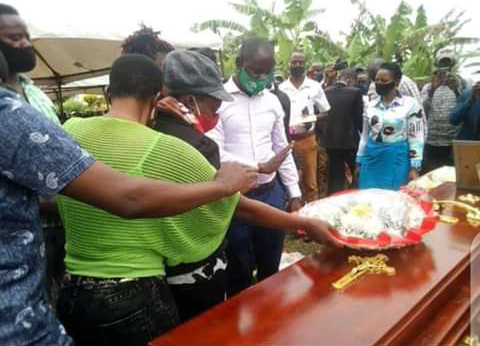 Allan Mandela who was killed by the girl friend Loyce Mbaine Tihainomwangire has been laid to rest at his ancestral home in kashari.

Loyce Mbaine has confessed to murdering her boyfriend Allan King Mandela; a Sports presenter attached to Bushenyi based Radio Station Hunter FM. Mbaine who by herself called police to rescue her from angry neighbors who were about to lynch her for killing the boyfriend told police why she killed Mandela.

Loyce who has been working with another radio station BFM as a receptionist in Bushenyi is said to have been depressed for a couple of weeks after testing positive for HIV.

Tihainomwangire and Allan Mandela King Mateeka aka Sports Master Mateeka were in a relationship for about two years.

Even Rogers Akandwanaho, the station manager at Hunter FM, was aware of the relationship, but revealed the duo had separated but later reconciled.