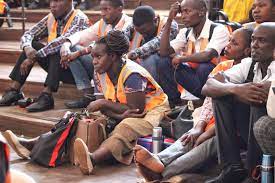 Over 50 employees from the Multiplex Limited Parking have petitioned the Kampala city Lord Mayor Erias Lukwago seeking for his intervention in their claim of unfair treatment and abuse of their rights.
The petition which was handed over to the Lukwago at City Hall raised a number of complaints including non-remittance of National Social Security Fund (NSSF), unfair deductions of wages, unpaid leaves including maternity and sick leaves.
“We are here to talk to the Lord Mayor and we believe that at least some of the issues we have raised will be worked upon as soon as possible. We shall not tolerate unfair treatment in 2023 because nobody seems to care,” one of the employees said.
The employees appealed to the Lord Mayor to intervene in resolving their concerns and ease their plight also raised concerns.
“We think Lukwago is the right person to handle our issue,” another employee said when asked why they have decided to petition Lukwago.
Speaking to these street parking employees, Lukwago said it was unacceptable for employees to be treated as alleged in total violation of the Employment Act, stating that he will summon Multiplex Ltd directors to come and explain being a street parking contractor with Kampala Capital City Authority (KCCA).
He advised the employees in future unionize or form an association to champion their interests using the powers in numbers to not only bargain for better terms of work but also protect themselves against such exploitative tendencies.
Lukwago also urged them to remain steadfast in demanding for their rights despite challenges they may face in doing so, assuring them that he will follow these concerns to their logical conclusion