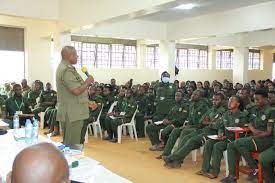 The Uganda People’s Defense Force (UPDF) Chief Political Commissar Maj. Gen. Henry Matsiko has urged youth to embrace unity and love in order to kick backwardness out of Africa.
Gen Matsiko was addressing Uganda Hotel and Tourism Training Institute (UHTTI) students who are currently undergoing paramilitary training at the Non Commissioned Officers Academy (NCOA), Gaddafi Barracks in Jinja .
“We need to love one another (patriotism) and extend this love to Africa (Pan Africanism) if we are to uproot the problems planted in Africa by imperialists,” Gen Matsiko said.
Quoting Walter Rodney’s ‘How Europe Underdeveloped Africa’, Gen Matsiko criticized the imperialists for draining Africa.
“Imperialists are bad people. You shouldn’t love them at all. It is the reason you are undergoing this ideological orientation so that you do not get lost,” he said.
The UPDF Chief Political Commissar said the campaign he had embarked on was aimed at decolonizing the mind.
“Once the mind is free, then the country will be free. We need to free ourselves from imperialism in all its forms. The whites have no right to determine our destiny. We must stand up and tell them straight in the face that we are also human beings,” Gen Matsiko said.
Laban Biryabarema, a senior instructor in the tourism department, said the paramilitary training equips students with the skills required to work in the wilderness.
“The training equips them with the skills and discipline required to work in the tourism industry. They can also ably use the skills to protect domestic, national and international tourists as well as serve as game rangers,” Biryabarema said.
The UHTTI students pursuing tourism disciplines as well as hotel management are currently camped at Gaddafi Barracks for a three-week paramilitary training course that aims at equipping them with gun-handling, map reading and martial arts skills.
The training, that is now part of the tourism and hospitality curriculum, is one of the measures the ministry is undertaking to ensure safety of tourists and guests amid looming security threats in the region occasioned by rogue elements like the Allied Democratic Forces (ADF) and M23 insurgents as well as the increasingly aggressive approaches poachers are using to kill elephants and other endangered species.