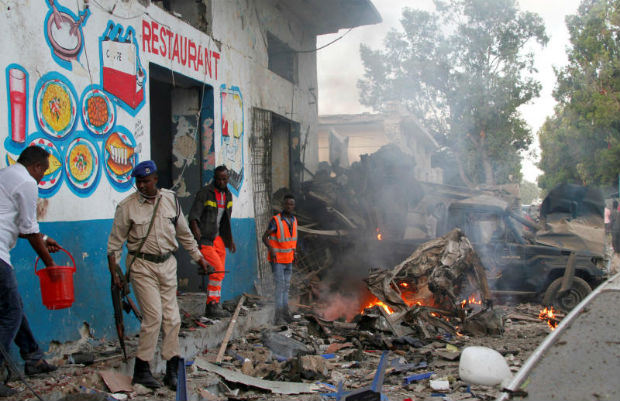 Three people are confirmed to have died and several others sustained severe injuries after a suicide bomber detonated  explosives in a restaurant in Mogadishu, Somalia on Wednesday.

Information ministry spokesman Ismail Mukhtar Omar said the attacker walked into the Blue Sky restaurant near Mogadishu National Theatre on Wednesday before blowing himself up.

“The target of the suicide bomber was civilians sitting at the restaurant,” he said. “He walked [among] them and detonated himself, killing three civilians and wounding seven.

“I was walking towards the location when the blast occurred and instantly got to the incident scene. Among the dead was a very young child.”

Witnesses said security forces cordoned off the scene after the blast, temporarily suspending movement in the area.

“The blast was very heavy. I saw people rushed to hospital, some of them were seriously wounded,” Kasim Ali, a witness, said.

There was no immediate claim of responsibility for the attack.

The al-Qaeda-linked armed group al-Shabab frequently attacks civilian and government targets in Mogadishu, which it controlled until it was driven out by Somali troops backed by African Union soldiers in 2011.

On Monday, a suicide bomber killed five Somali soldiers and seriously wounded an American military adviser in a village outside the southern port city of Kismayo.

In August, 10 civilians and a police officer were killed in a gun and bomb attack by al-Shabab fighters on an upscale beachfront hotel in the capital.