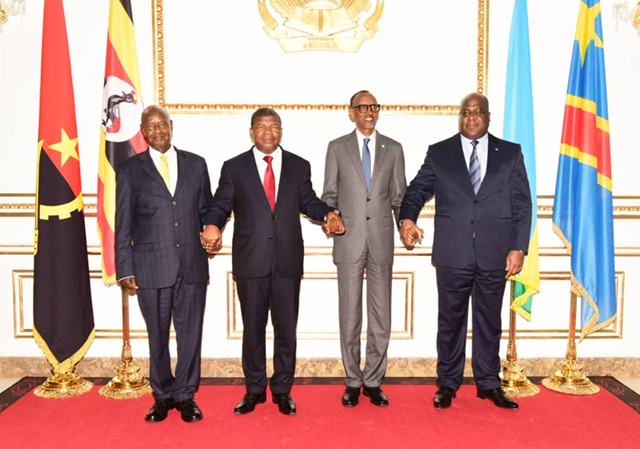 Heads of State from Rwanda, DR Congo, Uganda and Angola on Wednesday October 7, held a regional virtual summit to discuss peace, security, diplomatic and political relations, among others.

The summit which was hosted by President Félix Tshisekedi of DR Congo was attended by President Paul Kagame, João Lourenço of Angola and Yoweri Museveni of Uganda.

According to a post-summit communique, the summit offered the Heads of State the opportunity to discuss subjects of common interest seeking to strengthen relations and create stability in the Great Lakes sub-region.

Among the key subjects that were discussed at the summit include:

1.   The security situation in the Great Lakes sub-region

The Heads of State of the four countries reviewed the security situation in the Great Lakes sub-region. This saw them review the Addis Ababa Framework Agreement of February 2013 which affirms the security concerns of the countries of the sub-Region-Great Lakes region.

Agreeing that there was still work to be done to eradicate negative forces and armed groups operating in the Great Lakes sub-region, the heads of state agreed to continue cooperation.

This will among other things include cutting off negative forces from sources of financing of their activities and to jointly fight against both regional and international mafia networks which contribute to the illicit exploitation and trade of natural resources in the Great Lakes sub-region.

The Heads of State discussed the harmful effects of the Covid-19 pandemic particularly the loss of human lives recorded in the Great Lakes sub-region and in the world as well as its negative impact on economies. They offered their condolences to the bereaved families, and resolved to be extra vigilant in the face of persistent threat of the pandemic in their respective countries.

Heads of State present resolved to set up a cross-border plan to strengthen surveillance and control measures in response to Covid-19 and other ailments with epidemic potential between the four countries. This would at the same time respect national, regional and international laws.

Rwanda, DR Congo, Uganda and Angola reaffirmed their determination to consolidate cooperation between States and to pursue the exploration of economic opportunities, including facilitation of cross-border trade and infrastructure to strengthen the regional integration necessary for the consolidation of peace and safety in the Great Lakes sub-region.