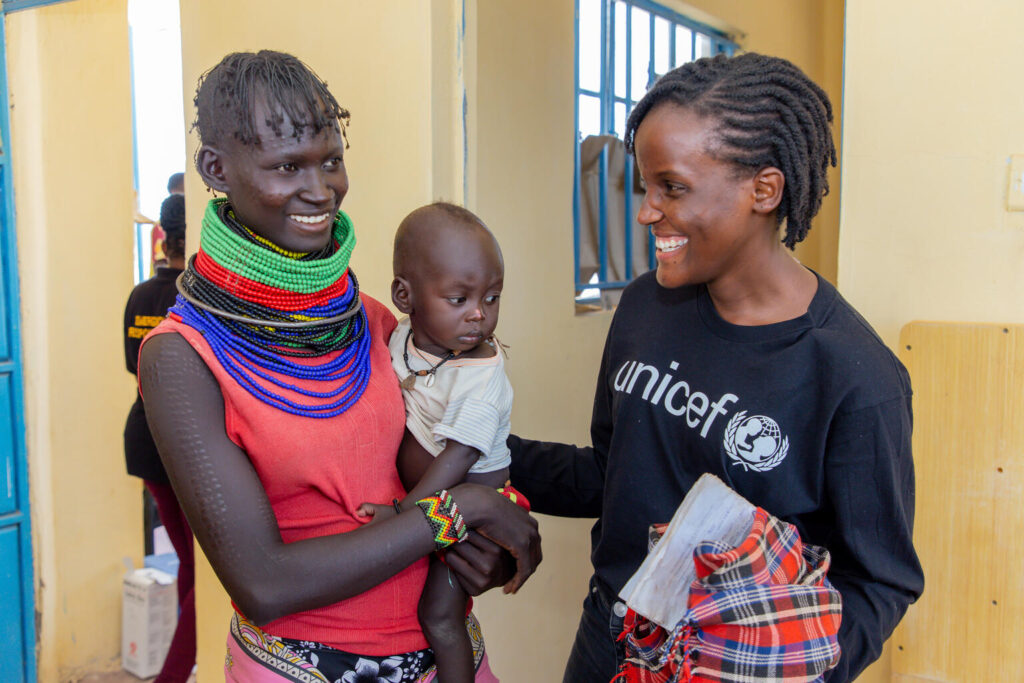 Nakate’s appointment follows a trip to the Horn of Africa, where she witnessed how climate change has contributed to the devastation of children’s lives in Kenya due to the ongoing drought crisis.
25-year-old Ugandan climate activist Vanessa Nakate has been appointed as the newest UNICEF Goodwill Ambassador, affirming her collaboration with the organisation and recognising her outstanding global advocacy for climate justice for current and future generations.
Nakate travelled last week with UNICEF to Turkana Country in north-western Kenya to see firsthand the impacts of water and food insecurity caused by the worst drought in the Horn of Africa in 40 years. In her first trip with UNICEF, she met with communities on the frontlines of the climate crisis, including mothers and babies receiving lifesaving treatment for severe acute malnutrition and families benefiting from solar-powered water supply systems.
“As a UNICEF Goodwill Ambassador, it will be my first responsibility to bring the voices of children and marginalized people into conversations where they were previously excluded. This role with UNICEF will provide me with more opportunities to meet children and young people in the places most affected by climate change and an expanded platform to advocate on their behalf,” Nakate said. “In Kenya, the people I met told me about the impact of climate change and drought on their lives, with four consecutive failed rainy seasons depriving children of their most basic rights. One community had not received any rainfall for over two years. This is more than a food and nutrition crisis, it is yet another dimension of our worsening climate crisis.”
UNICEF’s appeal to improve families’ long-term resilience in the Horn of Africa region – and therefore help stop drought devastating lives for years to come – is currently just 3 per cent funded.
Nakate began her activism in January 2019 with a protest with her siblings and cousins on the streets of Kampala, inspired by Greta Thunberg. She continued to protest every week, becoming a well-known face in a movement of young people “striking” for the climate around the world. In 2020 she came to further global prominence when she was cropped out of a news photo she appeared in alongside Thunberg and other white climate activists. Nakate’s response to the incident, in which she said the news outlet “didn’t just erase a photo, you erased a continent”, made international headlines.
“As a young African woman, I have had to fight to be heard by the media and decision makers. While I am fortunate to have a platform now, I intend to continue fighting for others. The children on the frontlines of the climate crisis, like those I just met in Turkana, Kenya, are the people for whom I will fight in my new role with UNICEF,” said Nakate.
Nakate has since used her platform to advocate for climate justice to include every community, especially those from the most affected places. She founded Rise Up Movement, a platform to elevate the voices of African climate activists, as well as a project to install solar panels in rural Ugandan schools. She has addressed world leaders at the COP25 and COP26 climate summits and appeared on the cover of TIME magazine.
“I am excited to welcome Vanessa Nakate to the UNICEF family as our newest Global Goodwill Ambassador,” said UNICEF Executive Director Catherine Russell. “Vanessa’s work to drive climate action that benefits the communities most affected by the climate crisis aligns directly with UNICEF’s mission to drive change for every child. We hope her appointment as a UNICEF Global Goodwill Ambassador will help ensure that the voices of children and young people are never cut out of the conversation on climate change – and always included in decisions that affect their lives.”
Globally, approximately 1 billion children – nearly half the world’s 2.2 billion children – live in one of the 33 countries classified by UNICEF’s Children’s Climate Risk Index as at “extremely high-risk” of the impacts of climate change, threatening their health, education, and protection, and exposing them to deadly diseases. The top ten countries are all in Africa.
Nakate joins the ranks of other recent high-profile supporters such as actor Priyanka Chopra Jonas, recording artists Katy Perry and Angelique Kidjo, Syrian refugee and education activist Muzoon Almellehan and, most recently, UNICEF’s youngest-ever Goodwill Ambassador actress Millie Bobby Brown.