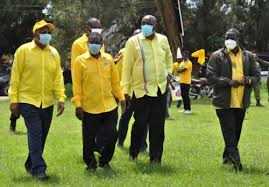 Party Flag-bearersUganda’s Prime Minister, Dr Ruhakana Rugunda, has rallied the people of Kigezi sub-region to vote overwhelming President Yoweri Kaguta Museveni and all the NRM flag bearers in the forthcoming election for the continued development.

Dr Rugunda said that the people of Kigezi need to vote NRM candidates all because President Museveni doesn’t work alone but works through others and those from the same party ease the harmonising of needs to spur development.

“Let us emulate our people from Kisoro who say ijana kwijana as we vote President Museveni again and we get one hundred percent of all the members of parliament to be NRM as President Museveni needs other people to work with and those are the NRM Flag bearers so that he can make a strong government,” said Dr Rugunda.

Dr Rugunda said this on Saturday while addressing over 200 people that defected from other political parties like UPC, NUP and FDC the function that was held at Kabale golf course ground on Makanga hill Kabale municipality.

He also cautioned Ugandans to keep observing the standard operating procedures from the ministry of health against covid 19 saying that it kills therefore asked the people to keep on observing them.

Richard Todwong, the NRM deputy secretary-general, assured the youth that NRM is a party committed to their livelihoods but cautioned the youth from being misled, indoctrinated with dangerous messages like engaging into demonstrations

Dr Chris Baryomunsi, the state minister of Housing, who also doubles as the NRM Vice-chairperson for western Uganda, revealed that youths make the biggest portion of the population because the NRM government likes youth as its because of the good government programs like immunization that most of the children born have managed not to die of some of the killer diseases.