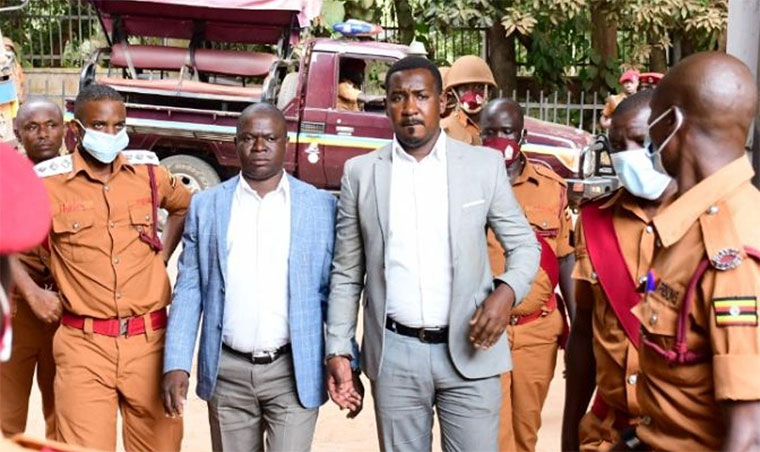 Five suspects who were jointly charged with Members of Parliament Muhammad Ssegirinya and Allan Ssewanyana have said that they were tortured to implicate the MPs on charges of murder and terrorism.
The suspects revealed this on Thursday while appearing before the court presided over by Lady Justice Jane Elizabeth Alidviza. The suspects are Jackson Kanyike, John Mugerwa, Bull Wamala, Mike Sserwadda, and Jude Muwonge.
In November, they were committed to face trial in the High Court on charges of murder, attempted murder, aiding and abetting terrorism arising from the wave of machete killings that marred Masaka and Lwengo districts between March and June 2021 where more than 20 people lost their lives.
When the matter came up for pretrial hearing on Thursday, the prosecution led by Assistant Director of Public Prosecutions Lino Anguzu told court that they have been able to disclose part of the evidence they intend to use against the accused persons.
The court heard that post-mortem reports of the deceased persons, sketch maps of the scenes of crime, and medical reports showing the state of mind of the accused persons during the commission of the crimes have already been shared with the defense lawyers.
Lawyers of the suspects include Caleb Alaka, Evans Ochieng, Erias Lukwago, Shamim Malende, Samuel Muyizzi Mulindwa, and Geoffrey Turyamusiima.
The State Attorney asked the court to be given more few days to share with the lawyers some of the remaining evidence.
But shortly after Anguzu made his plea, Kanyike, one of the suspects told court that there is no evidence linking Ssegirinya and Ssewanyana to the Masaka murders. He alleged that he was tortured and taken to the Chieftaincy of Military Intelligence where he was told to pin the MPs.
According to Kanyike, he was tortured to the extent that he cannot sleep on both sides of his body and that he has since suffered incontinence diarrhoea.
Mike Sserwadda, another suspect complained of heart complications saying he has never received treatment.
Ssegirinya sent people into laughter when he asked the court to issue an order to arrest the State Attorney who as been handling the case saying that he has been playing tactics because he doesn’t have any evidence against them.
The Judge advised the suspects’ lawyers to file a formal application with court regarding the torture allegations.
The case was adjourned to August 11 and the suspects were remanded further.