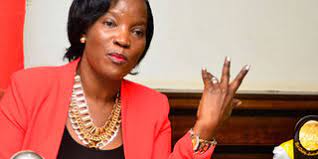 The chairperson Lc1 kalerwe kibe zoni Busulwa Ssura is stranded with the residents who have been selling goods along side the roads after being chased by Kampala Capital city Authority KCCA .
Currently kampala capital city Authority under the program known as Smart city which is being geared by the Executive Director Dorothy Kiseka is ongoing among which is remove the city dwellers who sell goods on the roads leading to congetion and disorganisation in the city
However the traders complain against KCCA chasing them on short notice and grabbing their goods.
Chairperson kalerwe kibe zoni Busulwa Ssura says his zone mostly residents are low earners and have being earning a living by selling small goods like vegetables, pieces of matooke, clothings among others and now are stuck.
He says the zone is likely to register crime levers as most people are seated now at home.
He wants KCCA to revise the methods and inform people in time for better preparations.
Byte .. sura kibe residents