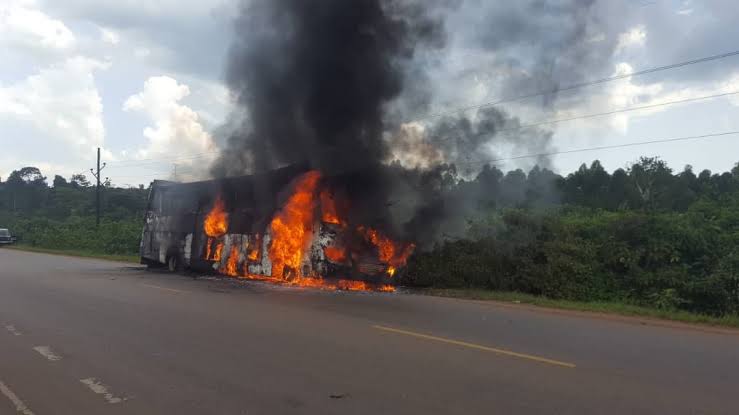 The bus Reg No. UAU 926U which was headed towards Masaka from Kampala caught fire at Kampilingisa checkpoint in Mpigi District
Reports indicate that the fire originated from failure in the bus’ braking system.
Reports further indicate that there was no fatality as all occupants were safely evacuated before the fire became serious but all property of the passengers was burnt.
Police confirmed the reports, promising to reveal the actual cause of the fire.
“The driver had been earlier warned about smoke from the rear but pulled over after the fire had spread,” Farida Nampiima, the Public Relations Officer for Traffic Police said.
“All the 37 passengers on board are safe and managed to exit the bus before it was entirely engulfed by the fire. The actual cause of the malfunction will be communicated later,” she added.
Government through the Ministry of Internal Affairs has come out to comment on the incident.
According to State Minister for Internal Affairs Gen David Muhozi, the government will investigate further to find out if the fire is in any way related to the recent terror attacks.
“We know that the bus developed a mechanical problem, driver stopped, passengers alighted but it got burnt. We shall ascertain whether it is related to the recent spate of bombs,” Gen Muhoozi told parliamentarians on Tuesday afternoon.
The incident comes two weeks after an explosion in another bus that was leaving Kampala headed to Western Uganda
In the explosion which was ruled as a terror attack, one Isaac Matovu, a resident of Kamuli A Zone in Kireka, Wakiso District