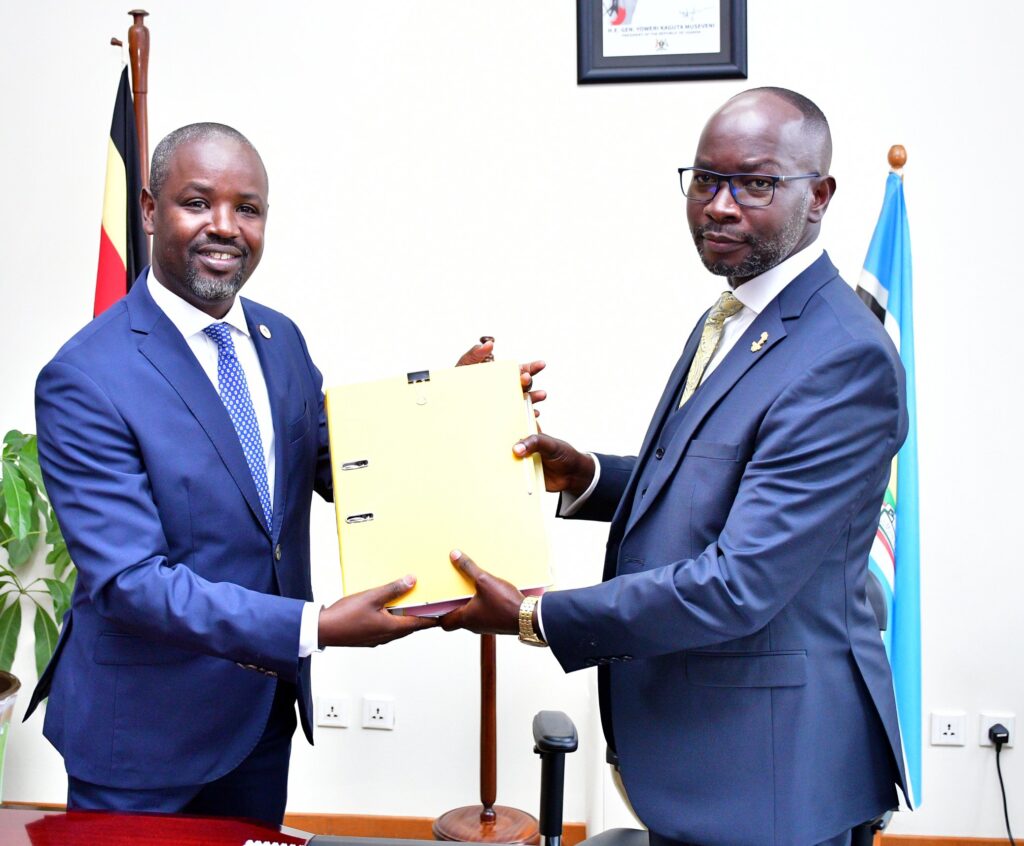 The newly appointed Government Chief Whip Hamson Obua has officially received the office from his predecessor, Deputy Speaker Thomas Tayebwa.
The official handover was held at Parliament on Tuesday, 16 August 2022 and was witnessed by the Prime Minister Robinah Nabbanja, Third Deputy Prime Minister Rukia Nakadama, Commissioners and Members of Parliament (MPs).
Speaking at the handover, Tayebwa urged Obua to maintain humility while interacting with and whipping ministers and MPs to actively participate in parliamentary business.
“We shall give you all the necessary support but I advise you to maintain humility. My success as a Government Chief Whip was by being humble. When you humble yourself before your colleagues, they will easily work with you,” Tayebwa said.
Tayebwa also urged Obua to work well with the Opposition in Parliament so as to easily come to commissions as government along with the Opposition.
“We were able to pass the oil bills because of this. The Leader of the Opposition came to my office for three days working till late because he knew I respected him. He knows that when it requires me to go to his office, I will,” Tayebwa added.
The Prime Minister Robinah Nabbanja commended Tayebwa for being a team player in his previous role, noting that he inspired her leadership through support while processing government business in Parliament.
“Whipping MPs from both the front and back bench to ensure that government positions are supported and MPs debate constructively, is not an easy job. I thank you [Tayebwa] that you did your best,” Nabbanja said.
She noted that in the second session, government is required to handle 62 bills.
Obua said he intends to add value to the work that is done by the office of the Government Chief Whip and commended the work of his predecessors.
He urged legislators to join his new role in the spirit of ‘Ubuntu’, and urged staff of the office to keep pace of work so as ensure notable achievements during his tenure.
“In the next one week, I want to apportion time to organise meetings and set the journey right from the beginning. I will hold meetings with the NRM Parliamentary Caucus and with staff of the office of the Government Chief Whip,” Obua said.