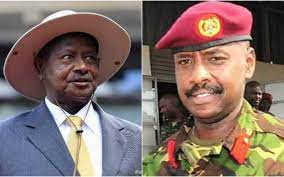 The legendary adage that every society gets the leaders it deserves defines Uganda’s political trajectory & for once I seem to agree that Museveni is the leader we deserve. I feel sorry to say that the Ugandan population remains the most foolish citizenry that any politician would wish to have.

Today the prices of essential commodities have shot up & government has declared to have no solution. Karamoja & Teso are on fire because of cattle rustling. Ugandans have been chased off the streets in the name of cleaning the city. Uganda’s leading agricultural export- coffee, which also employs 12 million people, has been handed over to an Italian cone woman in a dubious agreement signed by the government & a brief case Company. The farmers in over 50 districts are grappling with army warm that is destroying their gardens & no clear pesticide has been got.

As if that isn’t bad enough, the same cone woman who has been handed the coffee industry, two years ago bagged 400 billion to construct a specialized hospital in Lubowa and to date, not even the wheelbarrow can be found. In the face of all that madness, the first son and theCommander of Land Forces organized a birthday party and called on Ugandans to join him. The roads were blocked, and Ugandans were advised not to travel to the city if they had no serious business other than the birthday of Uganda’s prince. If indeed the regime wanted to test the seriousness of our citizens, they got the answer they wanted!

When I saw people turn up to celebrate the birthday, MPs many of who have not made their maiden speeches in Parliament lining up to Introduce themselves at the function like primary school kids, business people, pastors, ministers etc all clamouring for recognition at the function, I bled & wept internally; not for myself but Uganda; a country in disarray, with a population in misery and above all a scavenging middle class and savagery leadership!

I just imagined how naive, cowardly & unconscious we could be! That some sane people, with all their mental faculties functioning thinking that after 40 years with Museveni as a President, his son should be next as if the other 45 million Ugandans are fools? Indeed they should be, why not?.

If we aren’t under madness, how would a minister for agriculture explain, that he spent a whole day celebrating someone’s birthday when farmers are grappling with army warm finishing off their gardens?

How would a jobless impoverished youth tell his wife that he spent the day celebrating a birthday of a first son whose family has presided over the plundering of our country?

How would police officers sleeping in mama Ingia poles, whose children can’t afford decent schools ask citizens to stay home because a son of their commander in chief who has refused to pay them a decently is celebrating his birthday?

Gone are the days when Buganda used to negotiate for power, now they negotiate for leftovers! Despite the Baganda being chased off their land, others from Kampala streets and now their only remaining fortune coffee being taken away, all seems to be normal! Perhaps it’s the reason a few privileged ones in entertainment are singing for their captors at their birthday parties, while the political elite both in government and opposition are putting up mansions and making lavish parties!

The Bakonjo have been subdued; their king incarcerated, their cotton was killed, their lakes are being privatized, their copper is gone and their only remaining coffee is now being taken away but who will speak for them?

The Acholi are deep in slumber, after two decades of war; at some point, they were duped that they are in power until recently when every big person in power was eliminated (by death) & any attempt to reclaim that power was met by the bold reminder of “go to hell” by the Deputy Speaker Thomas Tayebwa!

The Langi who used to hold power am told have been relegated to gatekeepers, home guards & night watchmen with private security companies! Their own Jimmy Akena son of President Obote has since gone in bed with his father’s tormentor; he has joined the Banyankore saying that you can’t talk while eating!

The Basoga’s main source of income sugarcane has been monopolized by a few foreigners to the extent that poverty and jiggers have become their trademark.

The Karamajong, whose cattle are being stolen & whose gold was grabbed, have remained mute reminding me of the old saying that “we shall not wait for the Karamajong to develop”!

The Banyoro are too in slumber, I don’t know when their King last spoke, jobs in the oil sector are being given to outsiders, their forest Bugoma given away to investors, Budongo forest depleted etc. Maybe we call for the spirit of Kabalega to speak for them since their own; Prime Minister Nabanja and Finance Minister Matia Kasaija seem to have betrayed them in the name of eating.

The Banyankole/Bakiga are too in slumber, the talk that they enjoys free money from Museveni is a fallacy, maybe about 10% of them or less are enjoying; the majority are toiling on their own although they have accepted to carry Museveni’s cross for 36 years, including being abused on his behalf!

To all the Ugandan elites, to everyone holding a degree & still supports NRM, you have hidden your heads in the sand as Museveni & family destroy our country because you want to eat his crumbs & droppings.
You have neglected your duty of teaching fellow Ugandans who exchange their vote for a piece of soap and salt which now they can’t afford.

It is incumbent upon us to wake up and do what is right. Our choices today will determine whether our country will have a future or not. This requires us to do introspection and put a country before ourselves. Short of that, we will be modern-day slaves with no country to call home.