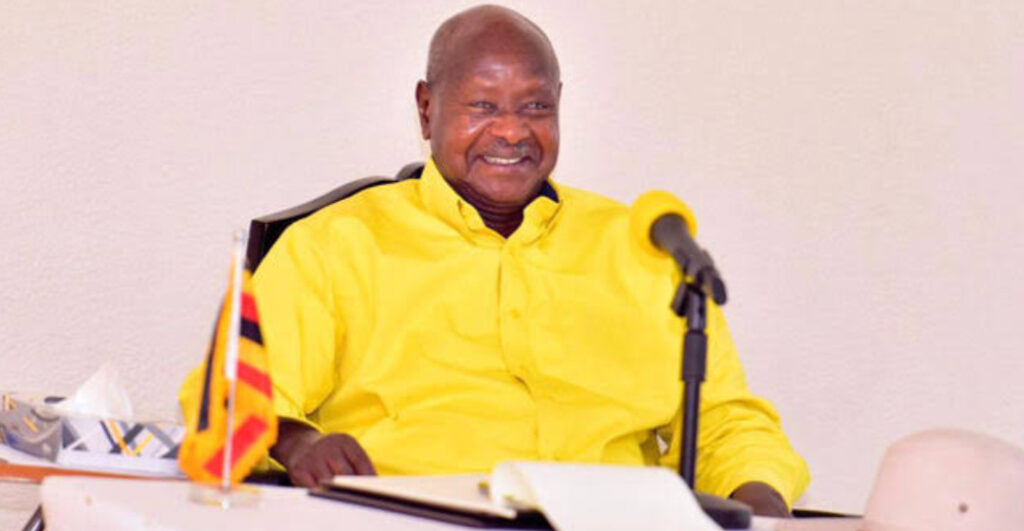 Yoweri Kaguta Museveni also the presidential aspirant has called on NRM leaders to rally people into production and wealth creation at family level if the country is to eradicate poverty.

Museveni addressed his supporters on Saturday  in Moyo drawn from the districts of Moyo, Obongi and Adjumani.

Emphasizing the key message of wealth creation, the President, whose speech was interrupted by sudden heavy downpour, said that Ugandans are not going to get prosperity by witchcraft or praying for miracle money in Churches, but by hard work with the right calculation of not only working for the stomach but also for the pockets.

“Having stabilized the politics by restoring peace as a result of a strong army, and laying a firm foundation for economic development, the biggest struggle we have now is rallying people to work for the pockets,” presidential candidate Museveni said.

He added: “Most people have been working only for the stomach, which is not sustainable, because you need money to live a good life and do other things which the government cannot do for you.”

The president said that in 2006, the NRM government launched the campaign of prosperity-for-all which has awakened most Ugandans into wealth-generating activities.

“I started moving around the country awakening the sleeping Ugandans while demonstrating that they could do projects on a four-acre piece of land. Most of our people are small-hold farmers who aren’t in the money economy; some of them have heeded this call and doing well,” said the NRM Candidate.

He further elaborated that he started mobilising communities to work for the pockets when he was a student in 1966.

We’re creating more jobs. The President reiterated the same message on jobs creation, which he had emphasized in the previous meetings, saying that the NRM government is now focused on creating jobs for young Ugandans having embarked on a strategic policy of inviting rich business people into the country including the Asians who had been expelled by Amin and giving them back their properties.

“We invited back the Asians to reposes their property and re-start businesses and today you can see what these investors have done. Uganda today has over 5,000 factories creating over 700,000 jobs to the locals and solving the problem of shortage of essential commodities including sugar, soap, cement,” he said, adding that Uganda is now suffering a good problem of excess supply.

“We have excess supply of sugar, milk, cement, among others because we have factories which are producing most of the essential commodities which were initially in scare supply.”

Besides the factories which are employing more Ugandans than the public sector (480,000), Museveni said that investments in the service sector has created 1,300,000 jobs, ICT 300,000 jobs. “We need more factories to employ more of young people, and most importantly, the nature of industrial development shall influence our education and skills development. “Employers will need people who are more skilled to work in factories, hotels, among others.”

Citing the case of the telephone industry, Museveni said that in 1986, Uganda had 21,000 telephone lines under the government parastatal of Uganda Posts and Telecommunications Corporation (UPTC), but today there are 28million telephones accruing from attracting foreign telephone companies.

The telephones, he explained, are employing Ugandans, and paying huge taxes which we are using to build roads, schools, hospitals, pay salaries among others.

According to Museveni, private sector development has enhanced Uganda’s tax revenue from Shs 5billion in 1986 to Shs 21trillion today.

At the end of his address, the NRM candidate received a symbolic gift of traditional Regalia which included a bow and arrow and a spear from the elders of Greater Madi.