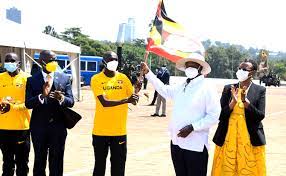 The President of the republic of Uganda YK Museveni has showered praises on his wife Janet Kataaha Museveni for what he called the remarkable transformation of the ministry of Education and Sports.
He made the remarks Monday while flagging off athletes who are going to represent Uganda in the Commonwealth games in Birmingham, UK.
Museveni, who kept referring to his wife as “maama” noted that as a minister, Janet has displayed great leadership skills using teamwork to solve the different challenges that the ministry has been facing for years and posting results nearly in every sub-sector.
“I want to thank maama because maama has been able to bring together this ministry because of teamwork. She likes teamwork. She calls me teams and because of her method of teamwork you can see what she is getting out, mobilising and also praying,” said Museveni.
The president stated that several other ministries and organs of government are in chaos just because those in leadership lack skills of teamwork and think that they are the only ones who can solve every problem.
“Part of the problems you hear in these organs is lack of teamwork. I don’t know why people want to monopolise problems. I can’t understand. Why do you want to have problems alone? Why don’t you call a meeting and say; we have got this problem, what can we do? Very simple, then you can hear what everybody is saying and then you also put in your opinion. How can modern people be more backward than the ancient Banyankole because Banyankole knew this…If you’re doing alarm for war or alarm for work, make a very loud alarm,” added the president.
Museveni appointed the first lady minister for Education and sports in 2016 taking over from Jessica Alupo, the current vice president. Prior to her appointment, Ms Museveni had previously served as the minister for Karamoja aAfairs, a portfolio she held since 2009.
Only last week, it took the intervention of the president to cow protesting teachers back into class after they laid down tools for 3 weeks for what they called discriminatory salary increment where science teachers saw their salary increased by 300% while that of arts teachers stayed the same.
Speaking at the same event, Ms Museveni attributed the said success in her ministry to the country’s stability and public finance. She cited, as an example, how spending on sports increased from Shs 6.8 billion in the 2015/16 fiscal year to Shs 27.67 billion in the 2020/21 fiscal year, resulting in 180 medals won across a variety of sports.
The minister recently noted that it is God who is using her to transform the education sector and reiterated that under her stewardship, the quality of education is and will continue to change for the better. However, ever since she was appointed, several opposition leaders have been calling on the president to redeploy and relieve her of the busy and demanding ministry. She hardly appears in parliament to answer questions regarding her ministry – often delegating the role to her junior minister John Chrysostom Muyingo.
For instance, FDC spokesperson Ssemujju Nganda stated that the education sector needed a minister who is prepared to be in the field identifying issues and providing solutions, as opposed to the first lady who, in his opinion, appears too busy and inaccessible. Ms Museveni’s management style came under intense scrutiny at the advent of the COVID-19 epidemic, which had an unprecedented impact on the education sector.
Technocrats and other stakeholders that seek an audience with the minister are required to meet her in the State House and all of them must get tested days before the meeting.
“This has been slowing business at the ministry,” a source at the ministry of Education noted.
The source however added; “that the first lady has been showing interest in understanding the ministry and listening to suggestions made by technocrats on different issues and always using her voice to attract funding to the sector.”
There are also complaints within the ministry about her bureaucratic management style where no decision can be taken without her personal approval.