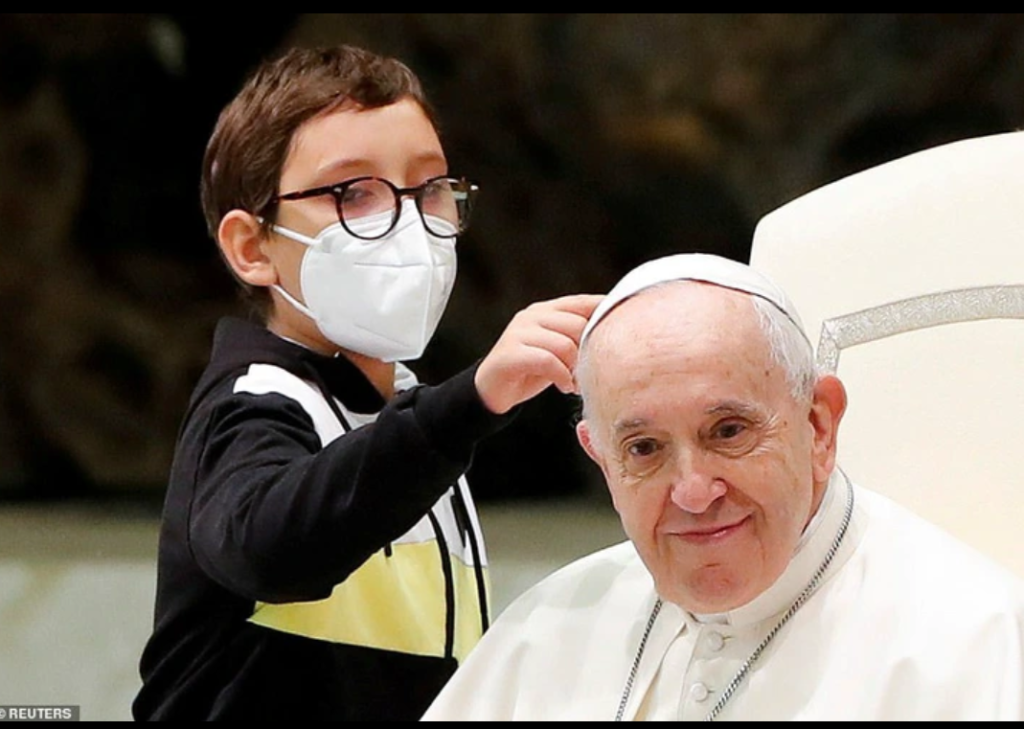 A boy of about 10-years-old with a mental disability stole the show at Pope Francis’ weekly general audience on Wednesday at the Vatican auditorium. In front of an audience of thousands the boy walked past security and onto the stage while priests delivered prayers and introductory speeches
The boy, later identified as Paolo, Jr., greeted the pope by shaking his hand and when it was clear that he had no intention of leaving, the pontiff asked Monsignor Leonardo Sapienza, the head of protocol, to let the boy borrow his chair
The boy’s activity on the stage was clearly a breach of Vatican protocol but Pope Francis didn’t seem to be bothered one bit. He looked at the child with a sense of joy and wasn’t even disturbed when he repeatedly motioned that he wanted to remove his skull cap.
Pope Francis’ skull cap or zucchetto as it’s called in Italian, is a symbol of his rank in the Catholic church. The Pope is the only church official allowed to wear a white zucchetto.
The zucchetto has been a Catholic tradition since about the 13th century. Capes with hoods went out of style so the clergy wore the small hats to keep their shorn heads warm.
A church official brought out a white skull cap for the boy and then he happily returned to his seat while receiving a round of applause from the Vatican crowd.
At the end of his address, Francis commented on the incident by praising the “spontaneity and freedom” of children. He lauded the boy for his ability to “come close and move around as if he were at home” and said the faithful should feel the same freedom to come close to God without fear.
He also asked God to help the boy with his disability.
“I thank this boy for the lesson he has given all of us. May the Lord help him in his limitation, as he grows, because what he did came from the heart,” the pope said.
Pope Francis could have easily had the young boy removed from the stage for being a disruption or seen him as affront to his high position as pope. But instead he took a page out of the good book and welcomed the child to his arms, just like Christ
“Let the little children come to me and do not hinder them, for to such belongs the kingdom of heaven,” Jesus is quoted as saying in The Bible. It’s wonderful to see the pope as a living example of those words while also being a shining example of how to relate to children with disabilities