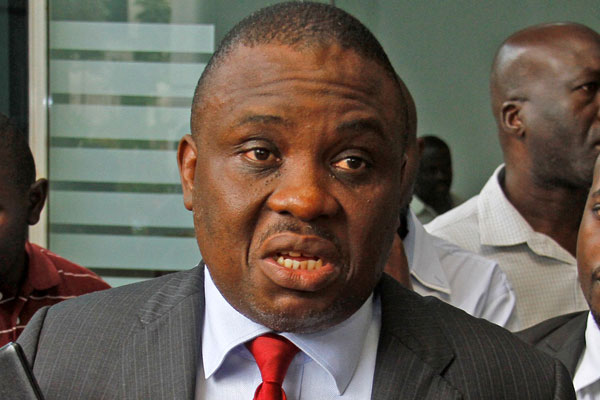 The police on Tuesday blocked a meeting the City Lord Mayor Erias Lukwago organized with leaders of different boda boda groups in Kampala to discuss the draft Public Transport Management Ordinance.
The meeting that was scheduled to take place at the City Hall could not proceed as planned after security personnel comprised of the police, military officers were deployed at the entrance of the KCCA headquarters blocking riders from accessing the venue. There was heightened security deployment at the Lord Mayor’s office and at City Hall where the meeting was scheduled to happen.
People were denied entrance to the KCCA headquarters except those with proper identification. Access to the Lord Mayor’s office was denied except to staff with identification cards. Not even journalists were allowed to enter the Lord Mayor’s office until later when it was almost clear, that the meeting couldn’t proceed.
Kampala Metropolitan Police spokesperson Patrick Onyango says that the meeting would attract many people and yet there were no Ebola SOPs.
“We thought that this would be an avenue for the spread of Ebola. We advise the Lord Mayor and team to get a better place, bigger space and put in place measures and guidelines to prevent the spread of Ebola,” said Onyango.
The Lord Mayor Lukwago says that the meeting was intended to gather views of boda boda riders since they are part of the groups that the ordinance seeks to regulate.
But the KCCA Speaker Zahara Luyirika and other members of the council accuse the Deputy Executive Director Eng. David Luyimbazi for instigating the police’s actions.
Luyirika says that on Monday, Luyimbazi wrote a letter to Lukwago to consider another venue other than City Hall citing security concerns.
Lukwago however says he is not privy to the letter and that he is yet to get any communication from Luyimbazi about why the meeting was blocked. He described the incident as unfortunate and unacceptable.
Luyirika accused the technical staff of sabotaging the council’s efforts to make laws to streamline operations of the Boda Boda industry. She says they can’t pass a law before gathering views from the different stakeholders to get feedback on the draft produced by KCCA.
Angel Kwagala, the woman councilor for Kawempe South said that they wouldn’t be cowed and shall continue fighting for the less privileged and streamline operations of the riders.
The bill, the Kampala Capital City (Public Transport Management) Ordinance 2022 provides for the regulation of public transport in Kampala, infrastructure, management, and supervision of the public transport sector to deliver public transport services which will result in an effective and integrated approach to the provision of transport services in Kampala.
The ordinance provides that a person operating a motorcycle, motorized tricycle or Boda Boda for hire or reward is required to acquire a license given by a competent Authority (in this case KCCA) as stipulated in the Traffic and Road Safety Regulations number 30 of 2016.
On top of acquiring a license, the operator is required for registration with KCCA by applying in writing to the Authority, getting a gazetted stage to operate from, and also paying registration fees as shall be determined by KCCA among others.