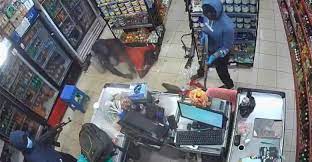 Police has revealed that they have arrested two suspects who attacked and robbed Spice supermarket in Mukono town over the past weekend.

“We so far have two suspects behind the aggravated robbery which took place at Spice supermarket in Mukono. Our flying squad unit and Mukono police have the two suspects who include William Mugalu aged 24 years and resident of Nasuti, Ntaawo cell and Sam Mbogo, 23 also resident of the same cell,” said Fred Enanga in a security briefing at Naguru

Enanga said that the duo was clearly identified by witnesses who managed to see what took place during the attack at the supermarket.
He said that although the suspects have been arrested, police have not yet recovered the gun used in the robbery but efforts are underway to recover it as well as identify other members of this criminal gang.

“At least the witnesses we have talked to have indicated that on the eve of the robbery, these suspects were sighted at one of the bars next to spice supermarket called cloud 9 and during the attempt to get away, one of them lost the hood on his head and he was clearly identified,” he said.

Enanga revealed that the criminal group appears to be more of an amateur group because of the panic and violence they used to release the bullets.

In the attack, a cashier identified as Irene Ssekandi was shot in the stomach and the bullet came out from the back but reports indicate that she is now out of danger and responding to treatment positively.