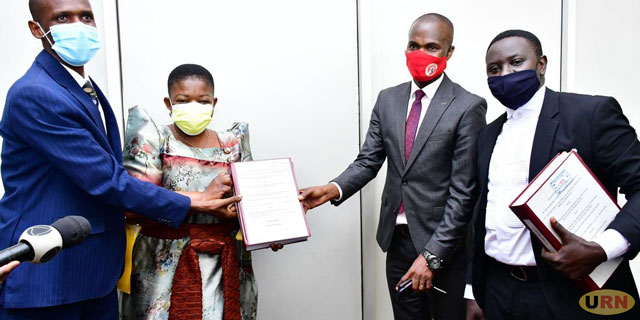 Ms Lumumba arrived at the Supreme Court in Kololo to receive the petition in which Kyagulanyi challenges the outcome of the January 14th presidential election.

The NUP candidate who scored slightly about 36% in an 11-man contest, has asked the Supreme Court to among others order the Electoral commission to conduct fresh elections. He claims that the electoral commission’s non-compliance with the law affected the final outcome of the ballot.

Meanwhile the NRM has lined up a team of 40 lawyers to defend the party against the petition.

NRM’s legal director Oscar Kihika yesterday expressed sympathy for the petitioners saying only 20% of the evidence collected is useful. He referred to the rest as ‘wolokoso’ (hearsay). He says they are prepared enough for such petitions.

“It would be silly not to prepare for an election petition. You start preparing early so that when the petitions come, you are prepared. I feel sorry for the petitioners, it is only 20% of the evidence collected that is useful, the rest is hearsay,” Kihika said.bit.ly/bettingoffersug

The deputy attorney general, Jackson Kafuuzi, confirmed receipt of the court summons saying these issues are always about evidence especially on the side of the petitioner.

“You can file a thousand allegations but all that matters is the substance in there. If there is no substance then it will be wasting time,” Kafuuzi said.