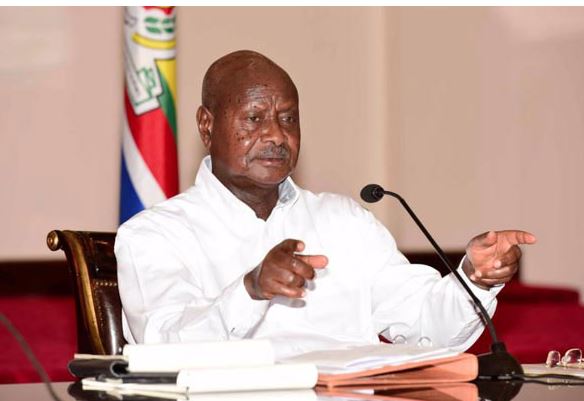 President Yoweri Museveni has ordered the police other security agencies to arrest all politicians distributing food to Ugandans during the Coronavirus lockdown and directed courts not to grant them bail.

Museveni issued the directive during his 9th  national address about Coronavirus in Uganda on Wednesday night, during which he also revealed that the number of infections in Uganda had risen to 53.

He added that “Again I heard of the politicians who are trying to involve themselves in the distribution of food. The police should arrest those people and eerr.. Arrest them for attempted murder because they’re interfering with the regulations.”

“Some people were talking of preparedness, saying Uganda is not prepared. No we’re very prepared. We had the outbreak of Ebola, at that time we had no were to test. We had to take the samples to Atlanta, Georgia. We no longer send tests anywhere.”

There are some actors that play with fire. This disease is very dangerous. Those playing with fire should stop playing and talking nonsense. You’re in the house bored? That is good for you, you could be in the grave. There is no boredom there, things are very calm. This is not about convenience. It is a matter of life and death.”

The President also said that; “I want to remind you again that the issue is not convenience, business or education. The issue now is a matter of life or death, we are not talking about normal life; we are talking about life and death on a large scale.

Commenting about people engaging in public exercises, Museveni warned that; “If you want to exercise, you can do it indoors. That’s how I survive. I usually come back late and find when Mama Janet has slept and I run around in the room. You make 20 laps and exercise. I don’t have huge space here, I would have shown you how to do that. I will make a video and send it to you.”

He commended Ugandans for putting into action guidelines that were issued by the Ministry of  Health to help in the fight against Coronavirus.

“I want to thank Ugandans for responding well and for behaving and listening to the guidelines. There are however some actors that play with fire. They play with fire. This disease is very dangerous especially to people with pre-existing health conditions like AIDS, diabetes, High blood pressure, etc.”

“On the issue of examinations, some people were putting pressure that they want to have exams. But this is not understanding the situation. The Banyakole have a saying that ‘ekifi kya mutuma’.. The house is on fire, we’re not talking of sleeping when the house is on fire.”

He however cautioned the management of Uganda Christian University to desist from conducting examinations during the COVID-19 Lockdown, saying that it is inappropriate.

He concluded by thanking many investors and individuals who have contributed monetary and relief donations to the National COVID-19 Taskforce to help in the fight against the pandemic.

Museveni also reiterated about his directive stopping boda-boda from carrying passengers by saying that; “No boda boda should be seen carrying a person. Even if it is your own baby, please. We said that they should only carry cargo. But these boda-boda’s should stop at 2:00Pm. We don’t want to see boda-boda’s on the Road after 2:00Pm.”

Meanwhile, the Minister for Health Dr Jane Ruth Aceng said that the Ministry is going to conduct tests on all people who came into contacts with the 53 confirmed cases of COVID-19.

“We are also going to test those who are carrying cargo and coming in through the borders. We know there are rising numbers from neighbouring countries so we need to check these people.”