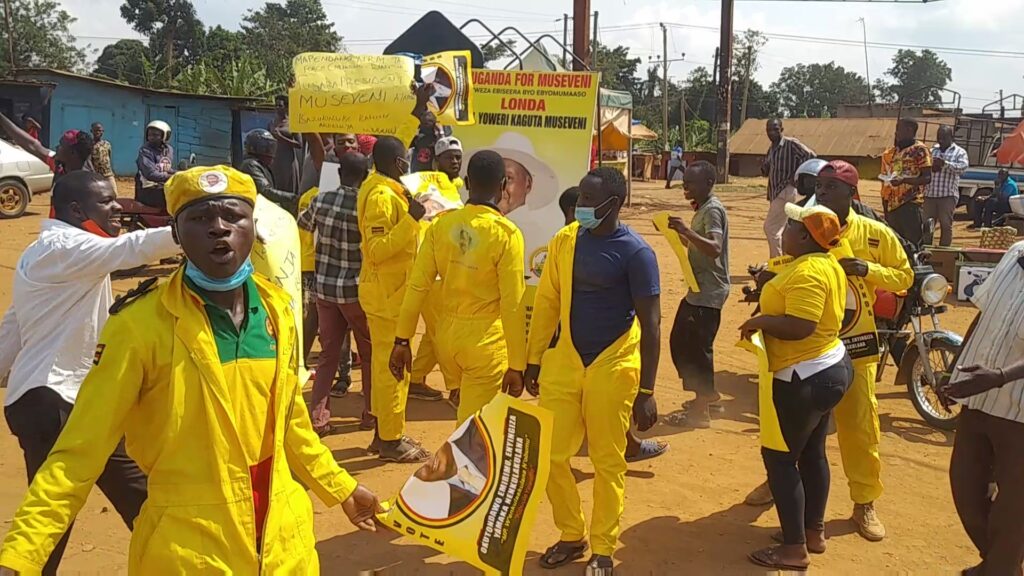 Hon. Ronald Kibuule was ousted by NUP’s Abdallah Kiwanuka in the just concluded January, 2021 general elections, and after a few months he was dropped from his ministerial position by the president.
Today a group of NRM youth members demonstrated against the sacking of the former State Minister for water from the ministerial position, these youth held placards with words pleading with president Museveni to reappoint Ronald Kibuule.
These youths led by their patron Nsubuga Jamila, demonstrated at Wantoni trading center by sitting in the middle of the road, blocking the Kampala-Jinja highway.
“This is a reminder to the president that taxi drivers in Mukono district did a lot of work to make sure that the president is voted back,” Nsubuga said.
Kaijuka Ben the chairman NRM Wantoni stage task force said that the sacking of Kibuule has led to the suffering of the youth in Mukono district more so in the lockdown.
Kaijuka said that NRM leaders in Mukono district have totally abandoned us in these tough moments. We don’t have food yet we were stopped from transporting passengers. We go through hardships to survive.
“They need us during election period for their political benefits, now we have no food, we have rent arrears from our landlords everyone is quite”
“President Museveni, please reappoint Hon. Kibuule, he did nothing to deserve the sacking, now we don’t have anyone to help us in hard situations” said Kaijuka the leader Wantoni stage
Nsubuga described the president’s act of sacking Kibuule as being unfair, he appealed to the president not to listen to opposition politician’s allegations of misconduct in the parliamentary campaigns in Mukono North.
“The opposition and some NRM members in Mukono are aiming at tarnishing the image of Kibuule” Said Nsubuga.
The NRM youth wing in Mukono believed that Kibuule did not deserve such humiliation after showing loyalty to the regime.