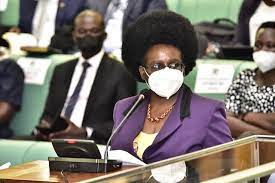 A section of Members of Parliament (MPs) led by Yona Musinguzi, the Ntungamo Municipality MP, have resolved to processing the censorship of the minister for Science, Technology and Innovation Dr. Monica Musenero.

The move comes hours after a parliamentary investigation recommended for disbandment and suspension of Preside, a company which received close to Shs 30 billion to manufacture Covid-19 vaccine with the support of Musenero.

By close of business on May 11, six MPs had already appended their signatures on the motion.

This follows a petition by Musinguzi in November 2021, to Parliament over alleged misappropriation of funds allocated for research and manufacture of Covid-19 vaccine during the second wave of the pandemic. This parliament to set up a committee to investigate the matter.

Xavier Kyooma, the MP Ibanda North who chaired the committee said they could not determine from the information given that whether a vaccine had been identified or was under development.

“The committee observed that in as much as Preside had a plan to setup production activity, they had not been cleared by the central public health laboratories to commercially produce diagnostic kits which leaves a gap thus recommending for the disbandment and suspension of funding towards Preside,” Kyooma said.

Timothy Batuwa, the MP Jinja West said that Uganda does not have any technology or techician for the manufacture of Covid-19 vaccine.

He queried: “We don’t have a law on genetic engineering. What was on the mind of Dr. Musenero in receiving this money?”

Meanwhile Musenero dismissed some of the findings in the report as untrue.

“Preside was merged under the ministry of Science, Technology and Innovation so there’s no need for its existence. The Preside initiative had built a lot of capacity and I am greatly relieved because the report does not say anything about the Shs 79 billion that the petitioner alleged had been stolen,”Musenero said.

A few minutes after the release of the report, the MPs led by Musinguzi embarked on a process of censuring the minister.

“It is high time we started fighting thieves and I want now to categorically state that I have already signed and Musenero should go where she belongs,” said Naboth Namanya, the Rubabo MP.