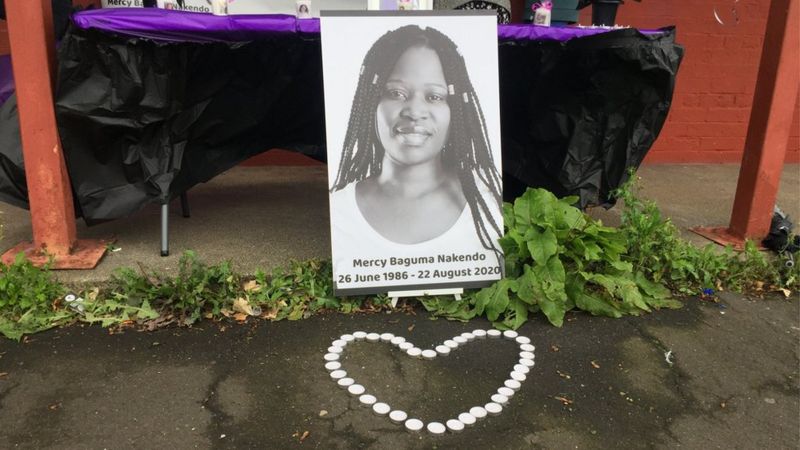 A memorial service has been held for Mercy Baguma, the Ugandan asylum seeker whose body was found in a Glasgow flat with her crying child.

The vigil took place in Elder Park in the city’s Govan area.

Eric Nnanna, father of Ms Baguma’s one-year-old son Adriel, called the police four days after he last heard from her.

Ms Baguma’s body was found in the hallway of her Govan flat on Saturday 22 August while Adriel was found in his cot.

Ms Baguma’s body was flown from Edinburgh to Entebbe, Uganda, on Friday.

It is expected her body will be buried on Sunday evening.

The remembrance service was organised because Mr Nnanna and his son cannot attend the funeral.

He said he last heard from Ms Baguma four days before she was found, and called police to force open the door after hearing his son crying inside.

The circumstances of her death are unclear. They have been described as “unexplained but not suspicious”.

The charity Positive Action in Housing (PAIH) said the cost of Ms Baguma’s repatriation was met by fundraising.

It said the remaining funds, totalling about £75,000, would be placed in a trust for Ms Baguma’s son Adriel.

Her death has prompted calls for reform of the asylum system in the UK.

PAIH has called for a public inquiry into her death and those of other asylum seekers in Glasgow, as well as into asylum seeker accommodation in the city.

First Minister Nicola Sturgeon said “wholesale reform” of the asylum system is needed, starting from “the principle of dignity, of empathy and of support for our fellow human beings”.

The Home Office said it would investigate Ms Baguma’s case.